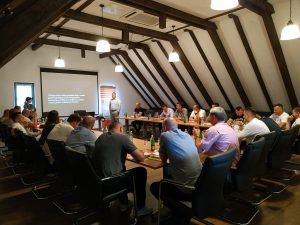 Sarajevo Open Centre, with the financial support of the Permanent Mission of the Kingdom of the Netherlands to the OSCE in Vienna, and co-operation with the OSCE Mission to BiH on 24 and 25 June 2019, held a two-day training for police officers of the Sarajevo Canton Ministry of the Interior called “Freedom of assembly: international standards and national legislation, practices of countries in the region and experiences from BiH”. Education concerned freedom of assembly as a fundamental human right, with a focus on lesbians, gay, bisexual, trans, and inter-sex (LGBTI) persons as a minority group whose right is often denied and / or limited. Education is preceded by the first Bosnia and Herzegovina Pride March announced for the 8th of September / September 2019.

During the first day of training, international standards and national legislation for the protection of freedom of assembly were discussed. Nina Šeremet, legal adviser and Igor Ličina, human rights officer, spoke to the participants in front of the OSCE Mission to BiH. At the end of the first day of the education, the participants had the opportunity to talk with the representatives of the Organizing Committee of the first BH Pride March, where the representatives of the KS MIO and the members of the OC Pride March could exchange expectations and deepen the successful cooperation, but also to discuss the period ahead of the maintenance of the Pride itself, in terms of planning and securing the event.

On the second day of training, the police officers of the Ministry of Internal Affairs of the KS were joined by Mr. Dusko Koprivica, a police officer of the Police Directorate of Montenegro, as a lecturer. Mr. Duško as a police officer of the Montenegrin Police Directorate was involved in the organization of the first held pride march in Montenegro, and as a police officer has a very rich expertise, especially in the planning of ensuring various gatherings and protests that required a quality and longer preparation and organization of foreign police. The aim of his presentation was to transfer his experiences and knowledge to his colleagues from the MIO KS in the context of planning the securing of the first BH Pride March. At the end of the second day, the participants had the opportunity to talk to LGBT people through the concept of live libraries, ask different questions about their different identities and life, and also to hear what the LGBTI community was expecting from the first Bosnian Herzegovinian pride parade. Police officers of the MIO KS, in a conversation with the members of the organizing committee and members of the LGBTI community, said that the KS MIO was in preparation and that the announced pride would be provided in the best possible way.