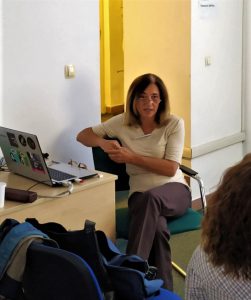 The lecture was consisted of two thematic units. In the first part of the lectures professor presented the development of the feminist economics as a school of thought, a scientific and pedagogical discipline and explained its key areas, epistemological and methodological domes, challenges and resistances that it faces. In the second part of the lectures, the feminist economic context approach was used in explaining economic violence against women and men in the processes of neoliberal finance, marketization and economization with which the countries of the region are facing. Special attention was paid to the neoliberal instrumentalization of feminism in promoting entrepreneurship as an emancipatory practice for women and pointed to the gender-based treatment and misogyny towards women on the example of small family entrepreneurship.