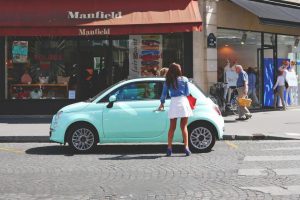 Ministry of Education, Science and Youth of Canton Sarajevo, in July this year, issued a Warning on the dress code for taking the driving license exam. With the warning, based on previous experience, the Ministry orders that the candidate for driver’s license should, during the exam in knowledge of traffic regulations/first aid/driving a motor vehicle, be properly and neatly dressed.

The warning specifies inappropriate clothes for both women and men, such as shorts and skirts too short, too open T-shirts and shoes.

The decision makes possible to disable access to the driving exam to people who wouldn’t stick to the dress code.

The Ministry’s decision aims at norming and equalizing appearances during one of the public acts, as is the driving test, and, in that sense, it is understandable and acceptable.

What concerns the most and to what we want to point are the comments to the article that the media web portal Klix published on 10 September 2017, to transfer this news. A large amount of comments is directed towards women, mostly hate speech and sexisms, where women are defined as whores, stupid, nice legs, prettier population, by which, using offensive terms, they are considered incapable of driving and, of course, weaker than men, so this Ministry’s decision is being justified through disqualifying women and insinuating that their way of getting the driver’s license is via body and way of dressing, and not via the knowledge they present. We put some of the comments here (in B/C/S language).

It is really devastating that in the public space (on the Internet) this kind of hate speech and spreading of harmful stereotypes and attitudes towards women is present, as well as incitement to discrimination and violence. These cases clearly show how necessary it is to regulate and prohibit incitement to hatred, violence and discrimination of any social group, by criminal codes of BiH, entities and Brčko District, on any ground, especially on the ground of gender, which is not the case at the moment, and no one who violated women’s human rights in these comments wouldn’t be sanctioned for their acts. Violence against women, physical, sexual, psychological and verbal, is a big issue in BH society and it is necessary to take action to prohibit its incitement, and for the state and entities to clearly stand in protection of its citizens from inequality, discrimination and violence.