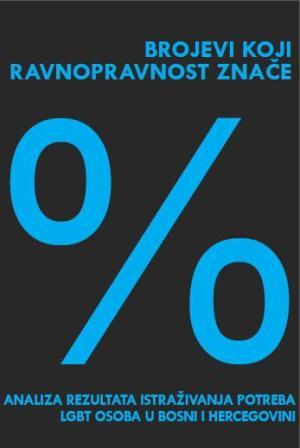 This article was published on radiosarajevo.ba

This is a analysis of the research results on the needs of LGBT persons in Bosnia and Herzegovina, authored by Jasmina Čaušević.

SOC has been working on the research of problems and needs of LGBT persons in BiH from February until July of 2013. The initial goal of this research was to locate real problems and to assess the concrete needs of LGBT persons in BiH in order to continue working on these problems using precise data in its lobbying, advocacy, human rights education, meetings and counseling activities, especially with the institutions which are shown to be discriminatory towards LGBT persons and don’t do their work in accordance with ethics using the politics of selective defending of the human rights.

PDF version of the book can be found here. (If you’re looking for the version in English, you can check it out here.)

Questionnaires were used to assess how persons of non-heteronormative gender and sexual identity, and sexual orientation live in BiH – which persons in their surroundings know about their LGBT identities and are they supportive of them, have they been discriminated of victims of violence and how they reacted to such violations of their human rights, how did the society and the legal system react, what do they think about pride parade and do they have trust in the law enforcement, is their physical health endangered because of the fear and homophobia they are subjected to because of their sexuality or gender expression, and how medics treat them. Also, opinions of LGBT persons on how they perceive their social needs, what does the members of the LGBT community think about the community, what they know about the work of Sarajevo Open Centre, and about the political participation of LGBT persons.

This analysis will be used as the platform for further advocacy and lobbying with the law enforcement, health, judiciary etc, for the changes affecting LGBT persons in a positive way.

The research included 545 persons, aged 15-54. When it comes to sexual orientation, 338 persons declare themselves as homosexual,  151 are bisexual, 25 are  pansexual, 7 persons are asexual, 9 are heterosexual, and 15 persons have answered with “other”, adding their understanding of their sexuality.

Friend and family as support

Answers to the question “which persons from your surrounding know/don’t know that you are an LGBT person?”, establish that for 90,4% of LGBT persons, their friends know about their identity and a great majority of their friends supports them (89,2%) Also, work/school colleagues more often than members of the family know that the person is LGBT.

To the question “have you been subjected to some kind of discrimination because of you’re an LGBT person”, 35,8% have answered with yes, and 63,1% with negative answer. It is clear that the persons who are not out to the genera public> at work, in college, to their acquaintances etc – cannot be discriminated on the basis of their sexual orientation.

The research shows that the 40,7% of colleagues at work/school know that the person is LGBT, but almost half of them are not supportive at all.

Discrimination is not reported in 93,8% cases. Only 3 cases of discrimination were processed one case ended successfully, and 23 cases that were reported were never processed. Because of their gender expression of sexual identity, 23,5% of persons have been subjected to violence, and 74,2% of persons have never been subjected to violence. Every third person was subjected to physical violence, and almost every fifth to sexual violence. The victims of violence are almost always persons who are out.

Every third person that feels depression, fear, anxiety or other symptoms, decides to seek out professional psychological, psychiatric or the help of a therapist, and the reasons most often cited are related to the assumed incompetence of the persons they would approach or to the fear that their sexuality would be revealed.

Almost 70% of the persons singled out insufficient support from family and friends as the biggest problem. Although 85,2% of LGBT persons don’t have to hide their gender identity and sexual orientation in front of their friends, it is obvious that the most are not receiving emotional, psychological and social support they desire.