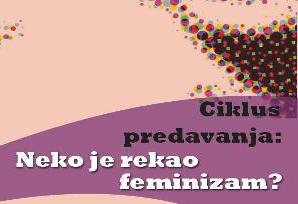 Sarajevo Open Centre, with the help of our partners Friedrich-Ebert-Stiftung in Bosnia and Herzegovina is starting the second round of our lecture series Somebody Said Feminism?, which will last from May to November 2014. The second round will have six lectures, and the themes will be connected to impunity and law, the militarization of everyday life, motherhood in the era of neoliberal capitalism, workers’ and social rights, modern BiH film art, as well as solidarity and accountability of feminism initiatives in BiH.

We recall that in October 2013, we started the lecture series on feminist themes, women’s rights and various questions about gender under a name that refers to a well-known collection of feminist texts, whose fourth edition included texts from Bosnia and Herzegovina. The idea that initiated the lecture serious was connected with the opening of public space in which critical thoughts and questions on various themes could be articulated, primarily from a feminist position. The themes that found their space in this series were determined by that which, in an analytical sense, would make them interesting for discussion. The lectures are intended for students, researchers, activists, as well as anyone else who has educational and political stances that are outside the status quo. The lectures are structured so that after a 50-minute presentation, the floor is opened up to questions and the development of debate. The themes that have already been covered include the second wave of feminism and feminine mystique, the (de)construction of gender through a religious perspective, and women on the edge, in the context of the XIX century, of feminism and sexuality from a citizenship perspective.

Also discussed was who do women represent in political bodies and whose interests do they stand for, gender and nationalism, and on Women’s Day, the topic of women in between lost authenticity, intolerable banalities, and political potential. The series closed with a panel discussion on feminism and informal education. You can find more about each discussion here.

We would like to to announce the first lecture in the second lecture series Somebody said Feminism?, which will be given by Selma Korjenić on the topic: How much impunity can justice survive? During the lecture the discrepancies between the legal and the social frameworks for the protection of survivors of wartime sexual violence and their everyday realities will be discussed. To what extent is it possible to talk about justice in situations in which the survivors of wartime sexual violence still daily run into the perpetrators? How does the state turn survivors into victims of the system meant to protect them, and the culture we live in sentences them to a life in fear and silence, with stigma and shame?