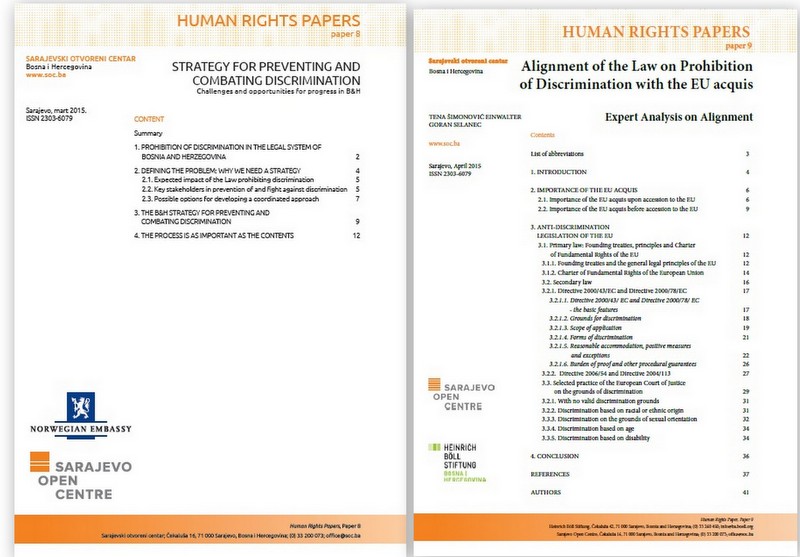 Discrimination is prohibited by the Constitution of B&H and constitutions of the entities, international treaties, national legislation and other relevant legal acts. Following the passing of the Law on the Prohibition of Discrimination in B&H, legal frame that prohibits discrimination on various grounds was created.

The Law on the Prohibition of Discrimination is considered to be a valuable tool for determining discriminatory actions and issuing sanctions for perpetrators. However, even though the Law enabled easier and more effective access to the justice, experts are stating that the implementation is lacking.

Several opinions by the experts, who are advocating for establishing comprehensive strategy for preventing and fighting discrimination, were offered in the Strategy for Prevention and Fight Against Discrimination – Challenges and Possibilities for Progress in Bosnia and Herzegovina. Aforementioned opinions could later serve for mobilizing a broader social reaction to the challenges that discrimination sets, ensure better implementation of the Law and provide protection for human rights to a bigger extent.

Considering the Bosnian political course oriented towards entering European Union as well as adopting European standards which could ensure better protection against discrimination, the authors Goran Selanec and Tina Walter Šimonović wrote the analysis concerning the synchronization of the Law on the Prohibition of Discrimination in B&H with the EU acquis. The analysis is written in the policy paper called Alignment of the Law on Prohibition of Discrimination with the EU acquis – Expert Analysis on Alignment. Synchronizing national anti-discrimination legislature with acquis communautaire is necessary because it includes its interpretation and implementation in accordance with the EU legislation. In this analysis you can find out what are the basic characteristics and specificities of the EU laws and its significance for the national anti-discrimination law.