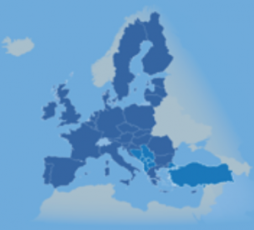 In November, the European Commission’s published its annual progress reports on accession states’ progress towards EU Membership. The reports include important and extensive information on the situation of lesbian, gay, bisexual, transgender and intersex people in those 7 countries.

The reports show that LGBTI people continue to face discrimination, threats and violence in the Western Balkans and Turkey. This is a consequence of both a lack of anti-discrimination and hate crime legislation, as in Turkey and the Former Yugoslav Republic of Macedonia, and a lack of effective implementation and prosecution of perpetrators, as is observed in Serbia, Kosovo, Bosnia-Herzegovina and Albania.

Successful prides in Albania, Kosovo, Montenegro and Serbia were welcomed, whereas Turkey was condemned for its clampdown on freedom of assembly, including the ban of and excessive use of force against Istanbul Pride for the second consecutive year.

Furthermore, it points out that LGBTI organisations under threat from fundamentalist terrorist groups did not receive protection from the Turkish government.

Vice-President of the LGBTI Intergroup Tanja Fajon MEP reacts to the reports: “On paper most of the accession states look like a good place to live for LGBTI persons. Nearly all governments have adopted anti-discrimination laws and hate crime laws. However, too often these laws are not translated in action.”

“Human rights are at the core of the enlargement process, and it is high time that LGBTI people can reap the benefits of this and no longer face violence and discrimination.”

Daniele Viotti MEP, Co-President of the LGBTI Intergroup, continues: “I am glad to see that transgender rights play a greater role in this year’s reports than in previous editions. We need to ensure that all states will guarantee decent gender recognition procedures, respectful of human rights.”