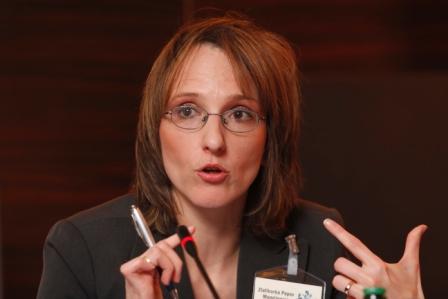 DUE TO ILLNESS OF LECTURER ADRIANA ZAHARIJEVIĆ, THE LECTURE “WOMEN ON THE EDGE OF CIVIL CONTEXT XIX CENTURY” WILL BE POSTPONED, THEREFORE, ON THURSDAY, WE WILL HAVE A LECTURE ON:

“We do not want piece of the pie, but to make a new one” Dorothee Solle, the German feminist theologian

In the second presentation of the cycle “Someone Said Feminism”, one segment will be devoted to the topic of race and religion. The theme is comprehensive due to the diversity and religious manifestations of which intersects and overlaps with those social and political, but precisely for this reason,a spaces open for the deconstruction of the existing practice of excluding women from the religious order of things with different anchor points.

Women in the pre-modern and general communities before the occurrence the monotheistic religions had a better position in society and religion because of the specifics then ruling rituals, unexpressed and impersonal hierarchical structure of that religion, as well as the fact that in these communities is not articulated dichotomy nature / culture. With the advent of the monotheistic religions their position varies widely on what will be given special attention because it is a religion that dominated in Bosnia and Herzegovina. A simple analogy that offers nothing more than a “cheap grace” (the phrase of German theologian Dietrich Bahnhoffera) – God is in heaven, the king of the earth, a man in the house was justified and ruled in different ways and “supported” unquestionably over an unequaled interpretations that are “occupied “the members of the Church.

The so-called: discourse analysis often suggest that the main problem lies in the way of interpretation and interpellation of gender and religion in the conscious and subconscious due to the dominance of patriarchal writing meanings with the text, which has resulted with the inferiority of women within religious communities, their invisibility and inaudibility. How discourses tend to totalization and normalization it occurs “patches” and “fracture” since no discourse cannot accomplish totalizing homogeneity. Women as figures of importance have over time developed their personal status and meaning inside and outside religious institutions and systems. This presentation will just put more emphasis on this area and opportunities for dezidentifikacijski resistance and to overcome the inferior role of women in the church, interpellations and exciting venture that began in medieval times (for example, in Europe during the famous Querelle de femmes).

The emphasis will be put on the three dominant paradigms when the position of women with the religion in general and religious communities word-inferiority theory, the theory of complementarity, the theory of equality, the importance of the different interpretations that are primarily developed within the so-called. feminist theology, “political theology”, theology of liberation and it will refer to some recent studies performed in Bosnia & Herzegovina on the position of women in the local religious communities and the dominant religious interpretations of their relations between.

One of the segments of the presentation will be also about the importance of women’s experiences as a foundation around which a criticism of the ruling regime of truth that under the guise of normalization with the Foucauldian sense tend to maintain hierarchical relationships in the church and that “pour out” as in the ritual anointing of the whole world through the plane of symbolic representations of the world picture, ie. heaven and earth.

Dr. Zlatiborka Momcinovic-Popov (1975, Vrsac) graduated in sociology at the Faculty of Philosophy in Novi Sad. During and after the study she worked in the NGO sector and the local media, and from 2005th was engaged as an assistant at the Faculty of Istocno Sarajevo, where she was graduated with the theme “The Political Culture in the Transition Period.” She has finished her Ph.D. with the theme :”Women’s movement with the post-Dayton Bosnia and Herzegovina: achievements, initiatives, controversies.” at The Faculty of Political Sciences in Belgrade 2013th. She has published more than forty scientific papers in the field of political sociology, political religion, and feminist theory and practice. She was a scholar of the Open Society Fund Bosnia and Herzegovina under the “Policy Fellowship Development Project”, and engaged in several local and regional studies such as “Religion and Pluralism in Education: Comparative Approaches in Western Balkans”, “Reconciliation and Trust Building in Bosnia and Herzegovina “,” Speech of hate in Bosnia and Herzegovina “,” Parlamentarism in Bosnia and Herzegovina “,, ” Coming out: Promoting and protecting the rights of LGBT persons.” She is a deputy editor of the BH magazine “Discourse”.