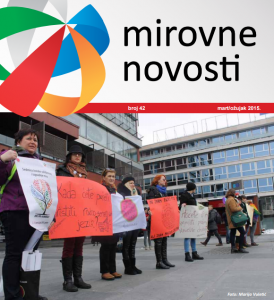 Floods, Maternity Benefits and General Elections in the Context of Women’s Human Rights in BiH

Hardly any BiH citizen will look back at the previous year as a good one – protests, floods, tensions caused by constant conflicts among political parties that hold the country in a blockade and lead unsuccessful talks on meeting the conditions necessary for moving towards European Union membership, unemployment, workers deprived of their rights, general elections that once again brought back the nationalistic parties to the ruling posts – the same parties that failed to do or hardly did anything in their previous mandates. Accordingly, 2014 was not a great year for the protection of women’s human rights. This was just another consecutive year where the women in Bosnia and Herzegovina were subjected to discrimination in exercising both their economic and social rights. In addition to the existing inequality, discrimination, gender-based and domestic violence, and social exclusion of women from marginalized groups (Roma, women from rural areas, LBT women, women with disability…etc), the women faced three key events in 2014: the floods in May, the issue of the right to maternity benefits and maternity leave, and general elections.

The review of the above-listed events together with all other significant events in the field of women’s human rights, progress (as little as there was) and stagnation and regression (proportionally higher) are presented in the Annual Report on Women’s Human Rights in 2014 co-authored by Dalila Mirović, Inela Hadžić and Edita Miftari. The report will be published in March this year by the Sarajevo Open Centre and CURE Foundation on behalf of the Women’s Network of BiH and the following sections of the text will refer to the data and findings from the report.

Women from the areas stricken by floods

The floods that swept the country in May 2014 had catastrophic impact on the state’s agriculture, economy, urban, rural and industrial areas and more than one million people in Bosnia and Herzegovina were directly or indirectly stricken by the floods, of which at least half were women. Lead by the BiH Government, the World Bank, the European Union and the UN held a research on the needs in the areas hit by natural disasters  (UN Women: Gender Equality in Post-Disaster Needs Assessment in Bosnia and Herzegovina) in order to identify individual losses of the citizens, their needs and to assess the costs of recovery. UN Women also contributed by analyzing the specific needs of women in these areas and by giving tangible proposals on how to solve these issues in order to ensure gender equality.

Considering the lack of differentiated, quantitative data on the damages and losses incurred by men and women in floods, UN Women conducted a qualitative survey on women’s needs interviewing Government and NGO representatives (both men and women) in the 15 locations hit by the May floods and thus based their analysis and recommendations on the collected responses.

Their findings imply that immediately after the flooding, in the initial phase when people’s lives were being saved, there was no gender discrimination and that there was no surge in the violence against women. The civil society expressed its greatest concern for the fact that there was a higher risk of labour exploitation and trafficking of women due to forced migrations and internal displacement following the flooding. The greatest loss and damages were incurred by the women who owned property or worked in agriculture since around 27% of the houses in the Federation of BiH and almost 40% of the houses in the RS are registered on women and more women than men work in agriculture. Very often, these farms were the sole source of income for the whole family and it is thus important to establish the same criteria for restitution for both men and women.

The UN Women Report also states that more women than men, mostly elderly women, were placed in collective centres. Prior to the flooding, these 28 centres accommodated persons internally displaced during the war of which 80% included single mothers or widows. One of the biggest problems for women living in these collective centres is the lack of privacy and personal security notably for nursing women.

As the UN Women survey on women’s needs in the areas hit by natural disasters in Bosnia and Herzegovina indicated, there is a realistic chance that most of the funds, small grants intended for business support and recovery together with employment funds collected in the period after the floods, will be directed towards men, despite the fact that the women, especially those who stand as the heads of households, have great needs for economic resources.

As far as the economic participation of women is concerned, the report indicates that there is still a traditional job distribution whereby women mostly hold less-paid jobs. One of the reasons for this is that employers often avoid employing women since they have to accommodate for their private and family life with the possibility of women being absent from work due to maternity leave. Speaking about maternity rights in the FBiH, it is important to underline that there is discrimination towards women who give birth, since the private sector is given the opportunity to choose whether the employers wish to reimburse the wage difference while in the public sector, this obligation is defined under the collective agreement and salaries are reimbursed from the budget and public funds. There is also discrimination with regards to the mandatory employment period prior to the maternity leave which stands as a precondition to exercise the right to maternity benefits (from 6 months in Canton Sarajevo and West-Herzegovina Canton, to 9 months in Canton 10), the percentage of reimbursement in comparison with the salary (from 50% in Una-Sana and Central Bosnia Cantons; 60% in Canton Sarajevo, 70% in West-Herzegovina Canton; 80% in Zenica-Doboj and Bosnia-Podrinje Canton; 90% in Tuzla Canton to 100% in Canton 10. Posavina Canton does not pay any maternity benefits, while women who give birth in Herzegovina-Neretva Canton receive a one-off fee amounting to 400.00 KM) as well as defining the minimum and maximum benefit amounts. Nine cantons have passed cantonal laws regarding the basis of social protection, protection of war victims and families with children of which eight canton have also stipulated maternity benefits. Maternity benefits for employed mothers are not stipulated under the law in Posavina Canton, Herzegovina-Neretva Canton does not pay maternity benefits while Zenica-Doboj Canton is several months late with payment of the benefits. In June 2014, Canton Sarajevo reduced the benefits for 100.00 KM for all employed mothers slightly increasing the benefits for unemployed mothers. If the above figures are compared, we can see that the legislation plays a significant role in great disproportions among cantons with regards to maternity benefits.

As far as the maternity benefits in Republika Srpska are concerned, they are regulated under the Labour Law, the General Collective Agreement, the Law on Social Protection and Rulebook on Exercising Child Protection Rights. The Law on Child Protection established a special fund from which the employer, upon issuing a written request, is reimbursed maternity benefits for the mother on maternity leave. The amount of benefits to be paid is established on the basis of the mother’s average salary in the last three months prior to her maternity leave.

Political participation of women and General Elections in 2014

Women are not equal to men in the political life of Bosnia and Herzegovina. Generally, there is a very low number of women political leaders either on state or the local levels. The results of last year’s as well as all other elections serve as an example. Another important research conducted by the Sarajevo Open Centre and CURE Foundation entitled Political Participation of Women in BiH in the Context of General Elections in 2014, authored by Edita Miftari, whose publishing is also planned for March this year, monitors the participation and status of women on the candidates’ lists and lists for awarding compensation mandates as well as the results of the General Elections in 2014. In the context of women’s participation at the above lists, the author underlined three major problems that stood out in 2014: (1) women were usually reserved second places on the lists; (2) there was a huge disproportion between men and women as leaders of the parties’ lists; and (3) men dominated as leaders of the lists for awarding compensation mandates.

When it comes to the formation of the government in BiH, the Election Law of BiH is not implemented consistently. The Women’s Network of BiH and the Initiative for Monitoring EU integration of BiH issued several press releases and letters in October and November 2014 calling upon political parties in BiH and the institutions to comply with the provisions of the Law on Gender Equality in BiH and to avoid excluding half of the BiH population from the political process. The letters and the press releases underlined that gender equality must be guaranteed during: appointment of parliamentary/assembly committees and/or boards; appointment of parliamentary/assembly Speakers and Deputy Speakers; appointment of Prime Ministers and ministers. Unfortunately, exclusion is once again on the scene and the law is not abided.

It still remains to be seen whether this year will be similar or worse than the previous ones. Relevant institutions should finally stop looking only at their own small interests and start being at the service of the citizens and protection of their rights. The civil society organizations on the other hand, need to stop hoping that the next year will bring about positive changes but start advocating and lobbying for human rights – to avoid having the next year eaten by locusts.

PDF edition of issue 42 of Mirovne novosti, where this text was published, can be downloaded here.