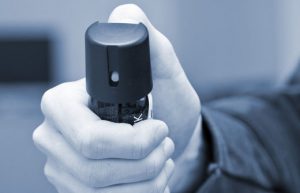 Sarajevo Open Centre has, in January 2017, received the information that the Canton Sarajevo Draft Law on acquisition, keeping and carrying of weapons and ammunition was established.

The provision that the proponent of the Law (Canton Sarajevo Government, respectively the Ministry of Interior Affairs) prescribes, and that abolishes the previously existing discrimination, is the possibility that the stun spray, better known as “pfeffer spray”, be purchased, kept and and carried by adults, with no restrictions regarding sex. The Draft Law is available here (in B/C/S language).

Saša Gavrić, in the name of Sarajevo Open Centre, noting the discriminatory provision in the previously applicable Law on acquisition, keeping and carrying of weapons and ammunition of Canton Sarajevo from 2007, that prescribed that the pfeffer sprays could only be purchased, kept and carried by female adults, filed a complaint to the Ombudsman Institution of Bosnia and Herzegovina. In the complaint, it was emphasized that such provision is clearly discriminatory towards male persons and, besides that, offensive for female persons as well, because it suggests that only they need a self-defense spray, as well as it a priori marks men only as attackers, and not as the ones who should also defend themselves.

We note that the defenders of the human rights of lesbian, gay, bisexual, trans and intersex persons and the very LGBTI persons (regardless the gender and sex) in BiH are often targets of hate speech and victims of hate crimes. That is why it is necessary to react and use the available legal remedies to point to discrimination and human rights violations.

So, in this complaint we wanted to make it known that men, according to that law, are forbidden to purchase and carry pfeffer spray, in order to potentially defend themselves, and that such provision discriminates against them.

In order to regulate this field correctly, together we pointed out to the existing discriminatory provision and asked for its removal through the making of the new Law.

In January 2017 we received the notice from the Ombudsman Institution in which they inform us that the Canton Sarajevo Assembly established the Draft Law on acquisition, keeping and carrying of weapons and ammunition of Canton Sarajevo that removes the discrimination provision and abolishes restrictions regarding sex when it comes to this weapon type for the cause of self-defense.

It is good to know that the institutions in BiH are doing their job, reacting to complaints of discrimination and are working to remove them. The battle continues…