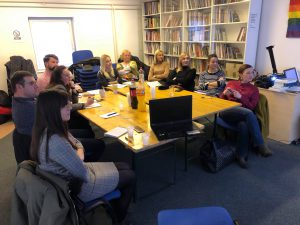 In the premises of the Sarajevo Open Centre, on January 17, an initial meeting was held with the representatives of civil society organizations, which showed interest in participating in the preparation of a shadow report on the state of human rights in Bosnia and Herzegovina. This report is submitted to the United Nations Human Rights Council (UN) within the third cycle of the Universal Periodic Review of the State of Human Rights (UPR).

The meeting was attended by 10 civil society organizations, where the data collection methodology was presented next to deadlines for preparing reports, with the division of initial areas in accordance with the specific expertise each organization has.

The meeting has been organized by Sarajevo Open Centre in scope of a project financed by the Government of Kingdom of the Netherlands.