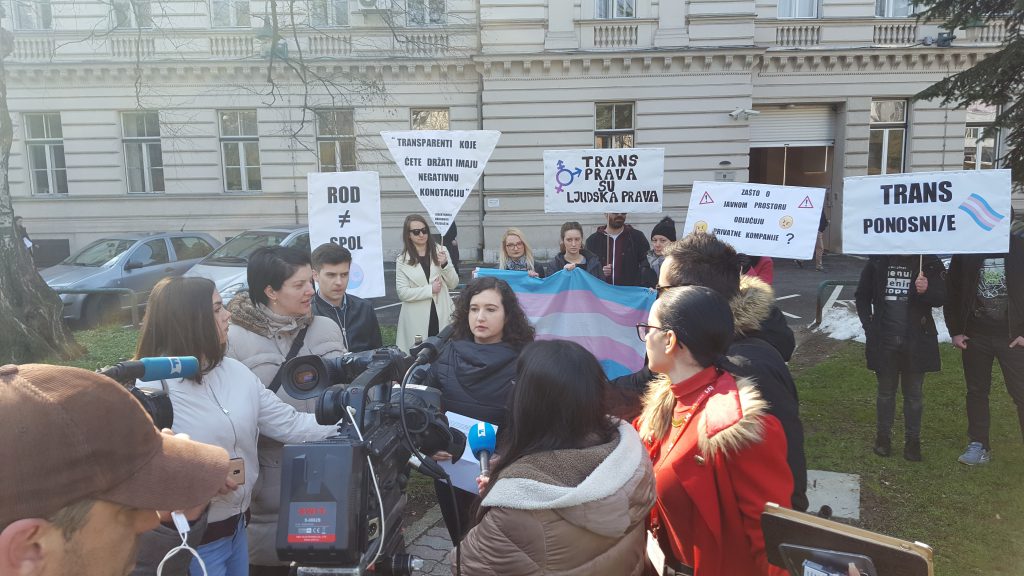 Today, 28 March 2018, we held a press conference in front of the Sarajevo Centar Municipality, where we once again drew the attention to restricting the freedom of assembly.

You can read our media announcement:

Sarajevo Open Centre has submitted a request to the Municipality Centar Sarajevo for permission to hold a public event in front of the BBI Centre. Our intention was to, through this public event, mark the International Trans Visibility Day, because transgender persons are one of the most marginalized social groups in Bosnia and Herzegovina. We also wanted to raise public awareness on the problems of these persons.

Since the square in front of the BBI center partly belongs to the Municipality Center Sarajevo and partly to the BBI Center, according to the procedure of the Municipality Center Sarajevo, to hold the event, we also needed approval of the BBI center administration. We received a mail from the BBI center administration in which we were informed that they cannot allow this activity, because there was already one other more important acitivity scheduled for that day, and they cannot approve “high-risk activities that require additional protection of the space as well as third parties”.

After we asked  them to explain how they make the security estimate, since according to the Law on Public Assembly of Sarajevo Canton, the Ministry of Internal Affairs of Canton Sarajevo determines the security assessment, and according to this Law, organizers are obliged to provide private security protection, as we always do, we received the answer that they “are trying to make the best decisions in terms of the capacity of the Square, occupancy, content, and many other elements”. We did not get a specific explanation of the procedure for security assessment.

Sarajevo Open Centre has already held an event in front of the BBI Center, with the support of the Ministry of Interior, without any security or other problems.

We also talked on the with the Theatre’s director, Marijela Hašimbegović. Our intention was to clarify that the performance is primarily artistic, and that art has long been used as a form of struggle for the rights of LGBTI people, and that we as organizers always take care of security, in agreement with MoI, in the way that we hire a private security agency. Trough conversation it was said to us: “It is not appropriate that performance such as this one be held in front of the National Theatre, because the banners you are planning to hold carry a negative connotation”.

We want to strongly condemn the homophobia and transphobia of the leadership of the National Theatre.

We believe that it is unacceptable to transfer the responsibility of facilitation and protection of the freedom of assembly of citizens of Canton Sarajevo to non-judicial institutions and legal entities, because this practice has led legal entities estimate the risk of citizens’ gathering, according to the Law on Freedom of Assembly of Sarajevo Canton, Ministry of Interior of Sarajevo Canton. Although this practice of the Municipality Centar Sarajevo is based on the Law on the Temporary Use of Public Areas in the Canton Sarajevo, this Law does not in any way address the issue of public gatherings or free access to public spaces, and as such is not applicable to meetings and events such as this one.

With this practice, the Municipality Center Sarajevo enables individual institutions and legal entities to interpret the Law on Public Assembly of Sarajevo Canton on their own, outside of the scope of the provisions of that same Law, and to apply discriminatory criteria in assessing to what group of people to allow access to the public space that already belongs to the citizens.

Because of all the above-mentioned facts and stream of events, we think that the right to public assembly was violated, and that LGBTI persons are being pushed back to their four walls and told that they are not equal in this society to other citizens. Wishing to research the motives behind these responses and sanctioning discrimination based on sexual orientation and gender identity, Sarajevo Open Centre filed complaints to the Ombudsman Institution related to the decisions of the National Theatre and BBI Center, and we expect the appropriate recommendations! 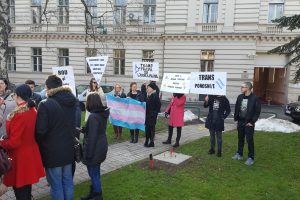 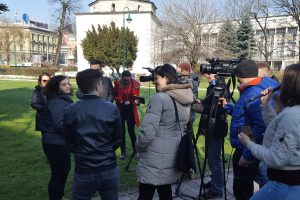