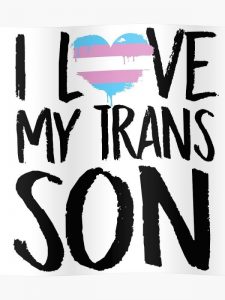 It’s hard to stay indifferent to mama Majda’s sincerity. She speaks in very simple language of her child’s outing, of transness, self-discovery, family relations, and challenges that enrich and unite.

Mama Majda is approachable, joyful, and exceptionally strategic in her presentation. She happily agreed to speak for the LGBTI.ba portal so as to send a message of support to all parents of LGBTI persons, as well as those who are faced with the challenge of accepting sexual orientations other than heterosexual and varying gender identities. As a mother of a transgender child, she shows by personal example that a state of shock is partly an expected outcome, but that it is also possible to find the strength for love inside yourself. Everyone who knows mama Majda and D would agree that they have the same smile and that they are both characterized by an openness and love of life. Majda starts off our conversation with a brief anecdote.

First, I’d like to say that at home, we always referred to D as Dijana and using female pronouns. He never asked for anything else. … This changed in the last year or two, when we talk to his godchild, who is nearly 5 years old. When we talk to that super-smart little girl, we always have to refer to him as D and only use male pronouns, because “she” isn’t “she” but “he.” … Without a lot of questioning or pedantry, and with infinite love. Even when I’m talking to some other person while she is playing, she follows and hears me peripherally and immediately reacts to correct the name or gender pronouns.

Majda, you are one of the mothers who took part in informal assemblies and gatherings of parents of LGBTI persons. How does that experience seem to you now, from this perspective?

Honestly, I didn’t expect such positive emotions or such beautiful, relaxed camaraderie with people I was meeting for the first time. Before that meeting of parents and children, I attended a few other gatherings and events with D, but on those occasions, no one in the group openly declared their LGBTI identity. I had a very nice and pleasant time with this group. I am sorry that more parents and children weren’t part of our meeting and socializing. They missed out on a very positive experience. An even better understanding of their children.

Did you feel a mutual understanding with other parents of LGBTI persons, even when you weren’t speaking of that which brought you together?

I felt as though I was surrounded by familiar, dear to me people. Relaxed conversation, chatting, and laughing in an all-day gathering, and then deep into the night… Nobody felt tired or wanted that magical day and night to come to an end. I’m not sure what I expected beforehand, but I know I didn’t expect that much positive energy, emotion, and intimacy.

How did you experience your child’s coming out and how do you view it now?

D grew up during the war, when she was less than 9 years old as a girl. We were together, which was the most important to us, but still, we were each on our own quest for survival. I’m not sure and I don’t know when she realized or concluded that she’s a He. I didn’t notice, or maybe I didn’t want to notice and make the connection. Slacks, sneakers, sporty clothing, and no skirts or dresses. I wasn’t interested in any kind of information about LGBTI people, I didn’t read about it, I didn’t know anything about people with different sexual orientations.

At age 18, she went to university in America, and upon her first return for winter break, just a few months after we sent our daughter off to school, and I believe it was fifteen minutes before the arrival of expected guests, she said casually, while placing silverware on the table, “Hey, mom, dad, I have to tell you something…” and straight to the head, “I am gay.” I think she wanted to put a time limit to the conversation and force me to just accept the information as normal. There were no harsh words, but honestly, I didn’t hug her with happiness. Her dad was better at that moment, in the sense of, come on, don’t worry, everything is okay, that’s totally cool…

But I felt like someone punched me in the face. Shock, disbelief, horror, tears, this isn’t possible, it can’t be happening to me, to us. It’s a phase, something temporary… This is all great as long as it’s happening to someone else. For a long time, I didn’t talk to anyone about it, not even those closest to me, not even to people who knew about her sexuality.

Can you remember something that you maybe needed at the time of D’s coming out, be it additional information, more knowledge, support from the rest of the family, conversation and advice from some other person…?

I thought I didn’t need any kind or anybody’s help. Unfortunately, I “self-medicated” with work from morning to infinity.  It really suited my employer at the time. I thought it suited me too… All three of us are “difficult” in terms of expressing our emotions. We “chew it over” inside ourselves and for ourselves. Back then I thought that if I don’t talk and I don’t ask, well, maybe it’ll pass, change her position, get over it… as if it were a cold (she laughs).

In that period and the following 7-8 years, he lived away from home most of the time because of school. He regularly came for breaks, always brought friends over, and had our full support in everything. He knew we were always with him, for anything he needed. He didn’t ask, but maybe he needed something more. I know now that we should have talked more in that time period.

What would you say to parents who maybe aren’t quite so strong and ready to face the different sexual orientation or gender identity of their own child? And what do you think they need most at this time?

I would now tell myself that I needed to seek more information back then. To learn how to openly talk with him, with my family, with closest friends… I always supported him, I was always there for him, but at one point we had let a lot of things go unsaid or unspoken. Left implied or assumed. Maybe I could, I definitely could have helped him more. Fortunately, he is a strong person.

I would tell parents who have any doubts that they should love and understand their child, that they should always be there with and for them, regardless of sexual orientation or gender identity. The most important thing is what your child will tell you and what you will tell them. What anyone else has to say is completely irrelevant.

A lot of my desires for his future have crumbled. But I realized long ago that those desires of mine aren’t important, and that the most important thing is that he realizes his own desires, that he lives his life in full force, which makes, I can say in every respect, for a very successful and fine young person.

The most important thing to a parent should be and is the joy visible in the eyes, face, and heart of their child. I am very proud of him.

This text is published with the support of the United States Agency for International Development (USAID). Opinions and attitudes expressed in this text do not necessarily reflect those of USAID or the United States government but are exclusively those of the author.

Text taken with permission from lgbti.ba.