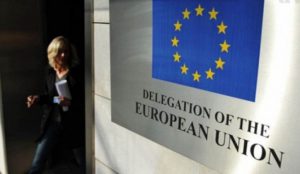 Every year as part of the Enlargement Review process the European Commission invites civil society organisations to submit their assessments of the developments and challenges in accession countries over the last year. As human rights more broadly, and the human rights of LGBTI people more specifically, continue to hold an ever stronger position among the Copenhagen Criteria accession countries are required to meet prior to becoming eligible for admission into the EU, the feedback of NGOs is crucial to enabling the European Commission to assess the progress made in each country to date, and to provide clear guidance on reforms or measures that still need to be taken.

As such, every year ILGA-Europe, in collaboration with organisations across the Western Balkans and Turkey, compile our own Enlargement Review reports in which we assess just that, specifically in relation to the human rights of LGBTI people and identify the “homework” we hope the European Commission will support us in urging accession countries to fulfil in the coming year.

Although this is an annual process, this year the global context of the state of human rights of LGBTI played a stronger role than previously. The last year brought an on-going stream of shocking news in an apparent regression of the human rights of LGBTI people across Europe. News of on-going illegal mass detentions and torture of gay men in Chechnya; of state not sanctioning arrests of perceived gay men and trans women, their forcible medical examinations in alleged clampdown on prostitution in Azerbaijan; of increasing hate crimes carried out with impunity in Georgia; police raids of LGBTI-friendly night clubs in Belarus; indiscriminate bans on LGBTI events in Ankara, not to mention news from beyond Europe, in Egypt, Tunisia and elsewhere have shaken the human rights world.  In such an environment, the situation LGBTI people are faced with in the Balkans may seem relatively good.

However, especially in light of the regressive tendencies that can be observed elsewhere, it is important to address the human rights of LGBTI people in the Balkans. Much progress has been made there in recent years when it comes to the promotion and protection of LGBTI rights. It is imperative to ensure that these achievements are real and sustainable, and that they do not become subject to regression. It is largely precisely because of the enlargement process that the majority of countries in the Western Balkans (with the exception of Macedonia and Turkey) are far ahead of several EU member states  in terms of legal and policy protections of LGBTI people on ILGA-Europe’s Rainbow Europe module. EU accession remains a key goal for the majority of the accession countries, and therefore the accession process provides an unparalleled opportunity for real, sustainable change.

In the majority of the accession countries, the legal frameworks and existing policies for the promotion and protection of the human rights of LGBTI people are strong. However, implementation and proactive tackling of pervasive negative public attitudes remains a key issue. Issues such as hate crime cases not being classified as such or investigated effectively, unimplemented national action plans, discriminatory educational materials, and hate speech, continue to be an issue across the region, despite strong legislation to the contrary.

Furthermore, gaps remain in legal protection, with lacking legal recognition of same-sex partnership and gender recognition procedures across the region. These priorities are crucial to the realisation of the human rights of LGBTI persons, and are part of the international human rights treaties accession countries are party to. As such, they are relevant to bring up in the context of the enlargement package and so you will see them outlined throughout the country reports.

Unfortunately, for the second year in a row, the report has had to highlight the worrying developments in Turkey and the consequences they have for the LGBTI community and civil society.  Hundreds of academics, human rights defenders and journalists have been arrested in the country; hundreds of NGOs have been shut down, while the President’s powers have been extended. A blanket ban on LGBTI events has been issued in Ankara, Pride marches violently attacked by police forces in Istanbul. Our report on Turkey this year focuses not on legal and policy changes needed in Turkey, but rather on the support the European Commission can provide to human rights defenders who find themselves at ever more increasing risk.

On the bright side, for the first time, a positive spotlight can be shed on FYR Macedonia, which after years of political stagnation, and many months of violent political crisis following parliamentary elections almost a year ago, has entered a period of positive energy and drive for change. The current period presents a unique opportunity to ensure that Macedonia now makes advances regarding the protections of the rights of LGBTI persons, and the actions needed are highlighted in this year’s report on FYR Macedonia.

While our process of submitting reports to feed into the Enlargement Review process comes to an end, the process for the European Commission is only beginning. In person consultations with civil society will take place in Brussels and across the accession region in January. Thereafter a lengthy process of assessing the information obtained, including from civil society, and drafting the subsequent reports will ensue, with the expected publishing date in April or May.

You can read the full LGBTI Enlargement Review 2017 submission here. It remains to be seen how much of this is reflected in the final reports. For that – stay tuned!

*The LGBTI Enlargement Review 2017 reports were written as part of a Sarajevo Open Centre run project “Utilizing EU Accession Processes for the Advancement of LGBT Rights in Western Balkans”, which covers Bosnia & Herzegovina, Serbia, Kosovo and Macedonia. However, the reports submitted cover all accession countries, including also Albania, Montenegro and Turkey.