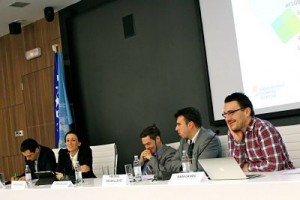 On December 16, 2013, the first regional LGBT conference “Advancing the Rights of LGBT Persons in the Western Balkans” was held in the UN House in Sarajevo. SOC and the Open Society Fund organized the conference on the occasion of International Human Rights day with the goal of presenting national mechanisms for the defense of the human rights of LGBT people and exchanging best practices for said purpose in the Western Balkans.

After the organizers opened the conference, Besima Boric, a representative of the Federal Parliament of FBiH, emphasized that it’s the obligation of everyone – not just LGBT people – to work on the creation of a tolerant society in which everyone can live without fear of violence and discrimination. After that, in two panels — National Mechanisms for the Protection of the Human Rights of LGBT People and Best Practices for the Defense of Human Rights of LGBT People — representatives from the ombudsperson’s offices and civil society from Croatia, Serbia, Montenegro, and BiH discussed the advantages and disadvantages of the legislative frameworks of these countries and their applications in practice. They also discussed their experiences in the areas in which more work is needed as well as interpersonal support and cooperation. Although it was not announced in the program, a short overview of the LGBT human rights situation in Macedonia was given in order to shed more light on the conditions for LGBT people in the region and the efforts of civil society and governmental institutions to improve them.

The role of the process of EU accession as an essential driver towards positive change in the countries of the Western Balkans was highlighted in both panels, as well as the cooperation of civil society with governmental institutions in order to develop effective national strategies and mechanisms for defense from violations of the human rights of LGBT persons.

There was also a presentation from Equinet, the European Network of Equality Bodies, entitled Equality Bodies in the Promotion of Equality and Non-Discrimination of LGBT Persons. Ilaria Volpe, a gender equality officer of Equinet, emphasized that although discrimination against LGBT people is widespread, there are still few cases reported, which means that civil society and equality bodies must work on building the trust of LGBT people in relevant reporting institutions.  She also said that organizations and international cooperative bodies for equality are a great way to overcome the problem of inadequate capacity action, which would facilitate and encourage the exchange of suggestions and advice between European equality bodies. It would also encourage their active work in all cases of human rights violations.

The conference was closed with an optimistic message from Marije Cornelissen, a Member of the European Parliament, who said that although the fight for respect and defense of LGBT human rights in the Balkans is a daily struggle, there has been noticeable improvement since her first visit to the region. At this time, state officials insisted that LGBT people did not exist in their countries and LGBT activism was limited to like-minded people sticking to each other surrounded by a necessary security presence. But today, there are more-or-less public in all countries of the region, such as the conference, that have the goal of promoting the rights of LGBT people.

Although it’s visible improvement, Marije Cornelissen said that LGBT people in the Balkans are the most discriminated against minority group and are still often forced to hide their sexual orientation and gender identity for fear of the reaction of their societies. It’s necessary to work a lot more on active engagement with governmental institutions in order for respect of human rights to intersect – in practice – with the legal framework of the countries of the Western Balkans and with EU standards.