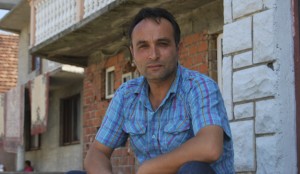 When fireman Redzo Seferovic came to a local café in his hometown of Zavidovici to have coffee with his friends on a winter morning of 2011, he could not foresee how much that day would affect his life. “For you Gypsy people, entrance here is not allowed anymore,” the waiter told them as he approached their table. Humiliated and shocked, Seferovic immediately called the police and decided to wait for the owner of the bar. After a few minutes, the owner arrived. Paying no attention to the other guests or policemen who stood next to the bar, he shouted, “Who let you Gypsies in here? Didn’t I forbid you to come in?”

Local activist Redzo Seferovic filed a lawsuit for discrimination against a café owner in his hometown of Zavidovici, who kicked him out due to his ethnicity. However, two separate BiH courts, municipal and cantonal, dismissed the charges on the basis that discrimination could not be proved.

For Seferovic, a local Roma activist, these words were enough to file a lawsuit for discrimination against the owner of the café. “I could not believe this was happening to me,” he said in one of his interviews to BiH media. But, regardless of the obvious example of unfair treatment towards someone of a different ethnic background, two separate BiH courts, municipal and cantonal, dismissed the charges on the basis that discrimination could not be proved (the judges of the Supreme court of FBiH should give their opinion to the appeal too).

Just like many other discrimination cases that went to local courts in towns across BiH, this case did not end positively due to a number of flaws in the current legislation, which are expected to be amended soon.

According to the law, there is a deadline of one year after the alleged discrimination for filing a lawsuit. After this point, a victim loses the right to complain. This is a serious threat to the effective protection of victims of discrimination, who, according to the findings of a policy analysis by the Center for Social Research Analitika, “take a long time to summon the courage to initiate a proceeding.”

The report notes that “The problem becomes especially relevant taking into account the fact that discrimination victims may often be persons who have difficulty understanding the official languages, persons with literacy disabilities or persons with certain types of invalidity, all of which, on a case by case basis, requires special attention and must be considered in order to provide them with efficient protection from discrimination and effective access to justice.”

A conference organised by the Institution of Ombudsmen for Human Rights BiH, which is central to the protection of BiH citizens against discrimination. To date, they have received over 1,000 complaints about discrimination from citizens.

The Ombudsmen registered a total of 230 complaints in the last year only. This represents an increase of 16 percent from the previous year. The Ombudsmen’s Annual Report on the Occurrences of Discrimination in BiH for 2014 notes that “This figure still does not reflect the actual scope of discrimination, as there are still unreported cases due to the general lack of trust in institutions, as well as the fear of negative consequences for victims.”

According to the mandate, the Ombudsmen has to analyse each individual complaint for discrimination and give its recommendations to responsible parties for each case. However, the number of complaints exceeds the number of cases that the Ombudsmen Institution can handle, and there is a backlog of cases from previous years still waiting to be reviewed.

The European Union has warned BiH governments more than once that the Ombudsmen Institution faces financial and human resource constraints that have a negative impact on its work, particularly with regard to the implementation of an anti-discrimination legislative framework. However, political support for the work of the Ombudsman Institution remains weak and the implementation of its recommendations continues to be low.

Due to the numerous shortcomings of current legal support to victims, some of the most prominent civil society organizations (CSOs) in BiH have developed their proposals to improve the law and are pushing for their adoption.

As part of the anti-discrimination coalition of CSOs named “Equality for All”, Analitika and Vaša prava BiH, together with Mediacentar Sarajevoand Prava za sve, have developed their suggestions for improvement of the current legal framework. They give concrete recommendations on how to prevent victimization, revise deadlines for submission of complaints, and strengthen the role of the Institution of Ombudsmen and CSOs in protection against discrimination. “People fear that, if they submit their complaints against discrimination, they will get into even bigger trouble, and nobody will want or be able to protect them. Victims of discrimination are in fear of losing their job if they report their employer. They also think that protesting against discrimination in schools will have negative consequences for their children,” said Ines Bamburac Alibasic, director of Mediacentar Sarajevo, the lead organization within the “Equality for All” coalition, to Kosovo 2.0.

Ines Bamburac Alibasic, director of Mediacentar Sarajevo, is part of the “Equality for All” coalition, which has developed suggestions for improvement of the current legal framework.

The proposal is based on the firsthand experience of the coalition members in using the law in their anti-discrimination programs, and on relevant analyses of judicial practice. It advocates that the victimisation of those reporting the act of discrimination should be defined as one of the forms of discrimination itself, thus strengthening support for victims. “Another problem is that people don’t believe in mechanisms of protection and they don’t want to get into long judicial proceedings that last between two and five years,” Bamburac Alibasic from Mediacentar Sarajevo said.

In early September, the coalition’s recommendations were presented at the first meeting of the working group for drafting amendments to the law. The Ministry for Human Rights and Refugees, which coordinates the working group that consists of governmental experts and lawyers, has decided not to include representatives of civil society in its work, but rather to give them a one-time opportunity to present their ideas.

Experts from the human rights organization Sarajevo Open Center (SOC) believe that the law should be considerably amended and hope that the working group will develop comprehensive changes. Director of SOC, Sasa Gavric, said to Kosovo 2.0 that, “Our objections can be summed up in two sentences: firstly, the law is not in line with the EU’s concept of acquis communautaire, primarily with the EU Charter of Fundamental Rights and anti-discrimination policies. Secondly, the law has significant procedural deficiencies that diminish or threaten the guarantee of the best protection of the victim.”

Director of Sarajevo Open Center, Sasa Gavric, is pushing to align the law in BIH according to the EU Charter of Fundamental Rights and anti-discrimination policies.

In their amendments, SOC proposes the introduction of “hate speech” as a specific form of discrimination. This makes it possible to file lawsuits against those who intentionally and regularly use speech that attacks a person or a group based on gender, ethnic origin, religion, sexual orientation or disability and, by doing so, stimulate discrimination against minority groups.

“Hate speech was used by Ivica Dacic [former Serbian prime minister and current minister of foreign affairs] towards the gay pride parade in Belgrade. The Commission for Protection of Equality, a Serbian Ombudsman body for combating discrimination, characterised Dacic’s behavior as discrimination and he was forced to apologise to the LGBT community. The introduction of ‘hate speech’ to the Law on Protection of Discrimination in BiH would be a great step towards the regulation of hate speech,” Gavric said.

The Ministry for Human Rights and Refugees BiH should propose the working group’s amendments to Parliament during autumn this year. Civil society representatives hope that new legal provisions will incorporate their suggestions and that the new legislation will more adequately prevent discrimination and provide equality to all citizens of BiH, without the need for judicial mechanisms.

“A very small number of BiH citizens have the time, money, knowledge and strength to go to court,” Gavric said.