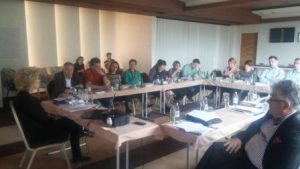 Sarajevo Open Centre in cooperation with the Centre for Education of Judges and Prosecutors of Federation of Bosnia and Herzegovina (CEST FBiH) has organized a two-day training on Jahorina from 9th to 10th of May 2016. Seventeen judges and prosecutors attended this training on the topic of “Anti-discriminatory and Criminal Law – fighting discrimination and violence against LGBTI persons: Experiences from Bosnia and Herzegovina and the region”. The financial support was given by the Embassy of Kingdom of Norway in BiH.

The goal of this training was to introduce the judicial community to the improvements of anti-discriminatory and criminal legislation and practice in the area of human rights protection (with emphasis on LGBTI persons which are a marginalized social group), which are of importance for their work in judicial institutions. Also, other goal was to sensitize judges and prosecutors to this topic, and to introduce them to the efficient ways of protection and processing human rights violations based on sexual orientation, gender identity and sex characteristics in BiH, in accordance to domestic legal regulations, respecting the international and regional legal  standards.

On the first day of training, judges and prosecutors have had a chance to hear about LGBTI terminology – about sex, gender, sexual orientation, gender identity and sex characteristics, and also about prejudices and stereotypes which are the causes of discrimination and hate crime. Naida Kučukalić has held this part of the training, and also talked and discussed with the attendees. The second session on the first day was about the legislative/legal frame which is applicable to fighting discrimination generally, as well as discrimination based on sexual orientation and gender identity. Nedim Kulenović from the organization “Vaša Prava BiH” has held this session.

On the second day, the topics were criminal acts/offenses committed out of hate based on sexual orientation and gender identity – legal/legislative frame, but also the analysis of particular cases from the regional practice, as well as from the practice of European Court  of Human Rights. Professor Marija Lučić-Čatić from the Faculty of Criminalistics, Criminology and Safety Studies in Sarajevo has held this session.

Judges and prosecutors have emphasized how important it is to educate the local judicial practitioners about the human rights of LGBTI persons, and that these educations regarding LGBTI human rights are very useful for their work.