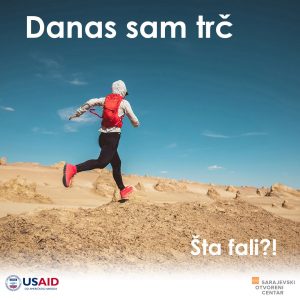 Fear of rejection, humiliation, mockery, marginalization, threats and even violence are just some of the challenges that transgender persons around the world face on a daily basis. At the same time, transgender persons in our country face a lack of institutional support for legal and medical gender reassignment, which has further strengthened systemic discrimination and social isolation.

On the International Transgender Day of Visibility, which is celebrated today, March 31, the Sarajevo Open Centre wants to draw the general public’s attention to the presence of transgender persons in our society, as well as the limitations imposed by the current social system. Specifically, whereas legal gender reassignment, implying the change of identification documents, is only feasible after complete medical gender reassignment, the health system in BiH does not permit the transition process. Thus, no medical facility in BiH provides endocrinological therapy or gender reassignment surgeries, and a certificate of complete genital alteration is required for a legal change. Therefore, transgender persons in BiH, who desire and can afford it, are forced to undergo the necessary medical procedures for transitioning abroad, at their own expense.

“Procedures for changing the personal identification number and other documents exist in the Republika Srpska, the cantons of the Federation of BiH and the Brčko District of BiH, but are not clearly prescribed and available to the public, and there is no rulebook detailing the procedure for collecting and verifying the applicant’s medical records”, said Delila Hasanbegović, program coordinator at the Sarajevo Open Centre (SOC).

The SOC emphasizes that legal change should certainly not be conditioned by medical adaptation in order for all transgender persons to fully exercise their human rights, because not everyone seeks complete gender reassignment.

“The adjustment process is very individual, because not everyone perceives gender reassignment the same way, given that there are different surgeries”, said Liam Isić, who completed the adjustment process abroad to the extent he stated he wanted to, while he has not yet managed to change the gender designation in his identification documents.

The majority of transgender persons are now completing the transition process in neighbouring Serbia, but if BiH wants to follow the guidelines of the World Health Organisation (WHO), it should provide transgender persons with access to health care and cover the costs of the gender adjustment process. This year, the revision of the International Classification of Diseases (ICD-11) goes into effect, bringing transgenderism into domain of sexual and reproductive health, with a new diagnosis of “gender incongruence”.

“The process is challenging for all countries because the implementation of any change in classification made by the WHO at the national level takes time to execute. We will see how quickly this can be implemented in BiH”, says Liam, emphasizing the importance of public support and the visibility of transgender persons in general.

Sarajevo Open Centre has launched a social media campaign Kaži nam #štafali (Tell us, #what’s missing) to influence public perception that transgender persons are an integral part of BiH society and that their human rights should not be endangered, using examples of different, everyday interests and activities that connect us as people, such as sports, music and travel, and wants to send a message that everyone should have the right to choose how they will declare and express themselves based on their gender identity, while the information about whether a person is a man or a woman is put in another, completely irrelevant plan.

*The campaign Kaži nam #štafali is implemented with the support of the American people through the United States Agency for International Development (USAID). The campaign is the sole responsibility of the Sarajevo Open Centre and does not necessarily reflect the views of USAID or the United States Government.

About the term transgender

Transgender is an umbrella term for people whose gender identity differs from the gender assigned to them at birth. The term transgender refers to those who feel, prefer, or choose to express themselves differently than the anticipated gender roles traditionally assigned to them based on gender assigned at birth, whether through clothing, speech, behaviour, cosmetics, or body modification. Among other things, the term transgender also refers to persons who do not identify with the male and female gender markers, as well as transgender persons, transvestites and cross-dressers.