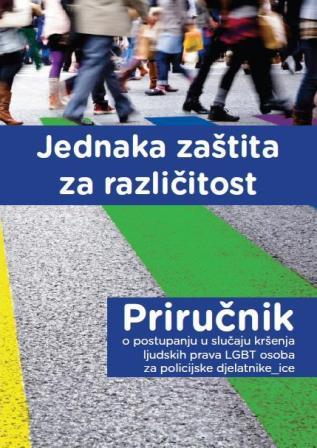 The Heinrich Böll Foundation, BiH Office, along with its partner organisations Sarajevo Open Centre (SOC) and CURE Foundation, is implementing the project Coming out! Advocating promotion and protection of LGBT rights, financed by the European Union. As a part of this project, a manual for police officers called Equal protection for diversity. Manual on precudure for police officers in case of violation of human rights of LGBT persons was published.

The main goals of this manual are to provide guidelines for police officers as the first responders in protection of human rights of every citizen, and to sensitize police officers to the problems of LGBT persons and the need to fully implement and protect the human rights of LGBT persons in Bosnia and Herzegovina – especially in case of hate crimes motivated by prejudice based on sexual orientation and gender identity.

Fear of coming out (self-disclosure of sexual orientation and/or gender identity), the reaction of their surroundings, and the reaction of employees in the state institutions are the main reasons why LGBT persons are less confident and less prone to report discrimination and hate crimes motivated by prejudice based on sexual orientation and gender identity. This manual represents one of the first steps in building trust between LGBT persons and police officers and support to the police agencies in Bosnia and Herzegovina in the protection of the human rights of LGBT persons.

This manual was presented at the meeting on support for the police agencies in BiH in the protection of human rights of lesbian, gay, bisexual and transgender (LGBT) persons, which took place on November 8. It will soon be posted on the website of Ministry of Interior of Canton Sarajevo, and we plan to distribute it in the near future to those for whom it was intended –  police officers in Bosnia and Herzegovina.