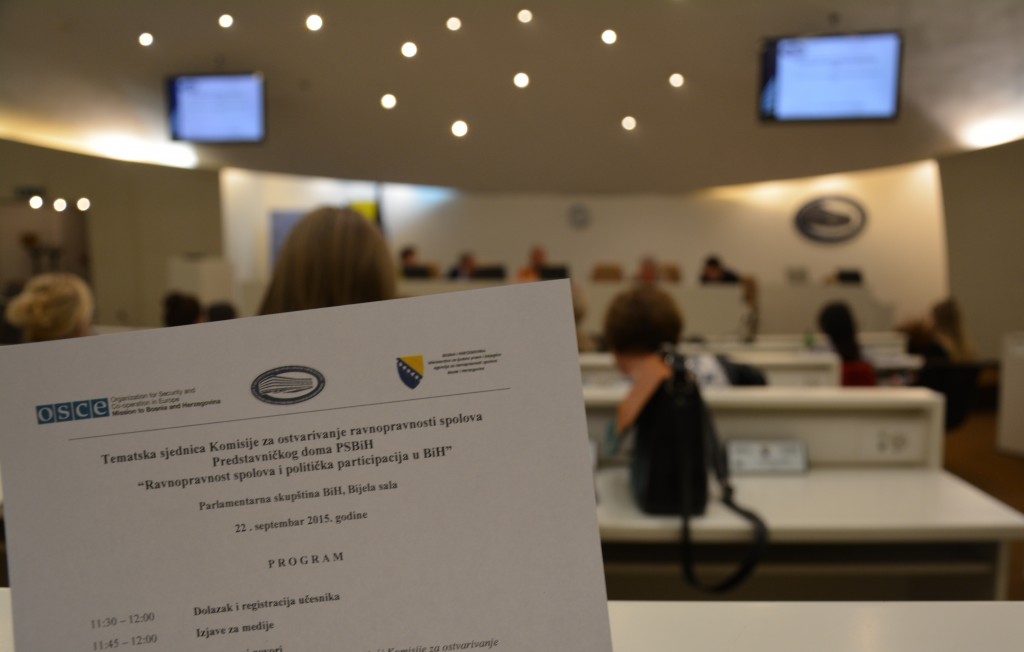 The guests were welcomed by Mirsad Isaković, Chairman of the Commission, and Samra Filipović-Hadžiabdić, Director of the Agency for Gender Equality BiH. In the first part of the session, Samra Filipović-Hadžiabdić and Maja Gasal Vražalica, MP, reminded us of the international obligations in the field of gender equality and political participation, as well as the current state of under-representation of women in the executive and legislative bodies.

What set this thematic debate apart from a large number of similar public discussions and events, were the models that were presented by Saša Gavrić, Executive Director of Sarajevo Open Centre, who suggested two central changes in BiH political system.

The first amendment relates to the government laws at state, entity and cantonal level. This change requires a clear definition that no governments can be appointed if both genders are not represented with min. 40% in its structure. Such a provision should be included in the Law on the Council of Ministers (Article 6) and on the Laws of the Governments of the Republika Srpska and the Federation of Bosnia and Herzegovina, but also in the laws of the cantonal governments. Such provisions would be applied after the general elections in 2018, so that political parties can adopt their internal capacities in the meantime.

The second amendment deals with the legislative bodies at the state, entity and cantonal level. In particular, after analysis of all possible models and interventions, two amendments to the Election law were proposed. The first amendment introduced a quota of 50% for the electoral lists. Under this proposal, the candidates on the election lists would be listed one after the other (so called zipper system), as opposed to the current solution. This would be an increase from the current 40% to an equal 50% representation. With the second change of the BiH Electoral Law, the so-called compensation mandates would be redistributed to the less represented sex. Cca. 30% of all parliamentary mandates on state and entity level are distributed based on compensation mandates (the other 70% are being distributed based on open candidates lists). In the case there are not enough elected women based on the open candidate lists, compensation mandates would be redistributed to female candidates. The same would apply if not enough male candidates would be elected by the open lists. Redistribution would result with a min. 40% representation of both genders in the state and entity parliaments.

Davorin Semenik, Secretary of the Commission for Gender Equality, presented the draft amendments to the Law on the Council of Ministers BiH, based on the model presented by SOC. This amendment will be on the agenda of the next official session of the Gender Equality Committee, which hopefully will accept the proposal and will propose it to the two parliamentary chambers for adoption. Mr. Semenik also invited colleagues from the parliaments of the entities and cantons to propose similar amendments to the laws of their governments. He also stressed that he hopes that the Gender Equality Committee will discuss the proposed changes on the BiH Electoral Law, that were presented by the Saša Gavrić.

If Bosnia and Herzegovina adopts these amendments to the Law on Council of Ministers and the BiH Election Law, our country would become a positive example for other countries throughout Europe. According to these solutions, after the elections in 2018, BiH would be one of the few countries in the world that have a minimum representation of 40% of women and men in the state parliament and government.

It is the role of all of us to support this changes so they become accepted in the parliamentary procedure.