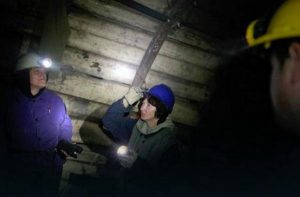 Sarajevo Open Centre, a few days ago, filed requests to examine the violations of the Law on Gender Equality to the Gender Centre of Federation BiH, BiH Agency for Gender Equality and a complaint to the BiH Ombudsman Institution, regarding the existing discriminatory provision in the Labor Law of Federation BiH and Brčko District, that prohibits women the work on underground jobs (in mines).

Namely, in the labor legislative of Federation BiH and Brčko District there is a provision that says that „a woman cannot be employed on underground jobs (in mines), except in the case of the work on a leading position that does not require physical labor, or with the social and health care services, respectively if she has to spend some time on training underground, or she has to enter the underground part of the mine periodically with the aim to perform an occupation that does not include physical labor“. We complain exactly about this controversial provision, emphasizing that such provision is not based in the constitutional and legislative order of BiH, nor in the contemporary practices of the International Labor Organisation and its standards.

We emphasize that this provision creates direct discrimination based on sex that is prohibited in the BiH Law on Prohibition of Discrimination, as well as in the Law on Gender Equality, and is also contrary to the anti-discrimination clause in labor laws that prohibits discrimination of workers and persons seeking employment, among others, based on sex.

It is important to note that discrimination of women in regards to participation in underground work was eliminated in most of the European and other countries, and in Republika Srpska the labor legislative was amended, so Federation BiH and Brčko District remain the only units that have not done it yet.

With these legal remedies that we headed towards the BH institutions we ask that the provision that prevents women’s employment in underground jobs be deleted from the labor laws of Federation BiH and Brčko district, and, in that way, to remove the unfounded sex-based discrimination. We also ask the Ministry of Labor and Social Policy of Federation BiH and the Government of Brčko District to establish draft labor laws that will eliminate this discriminatory provision.

We hope that these requests/complaint will have a positive effect on the institutions to eliminate the existing discrimination and enable all persons, regardless of sex, to do jobs they want and are qualified for.