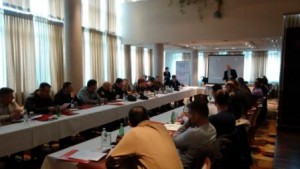 In 2016. education on bias motivated crimes will be held again, but in a slightly different way. With different MoI’s of FBiH we negotiated for the module about hate crime to be included into programmes of professional trainings and specialization of the police officers, and in the permanent education of Ministries of Internal Affairs in entire of Federation of BiH. Police officers who finish this year’s train the trainer program will continue to adequately educate their colleagues.

During 2015. as a part of two-year project Fighting Hate Crime in BiH, Sarajevo Open Centre has, on behalf of Coalition for Combat Against Hate Speech and Hate Crime and in partnership with OSCE Mission in BiH, implemented trainings on bias motivated crimes and prejudice as a motive of these crimes with financial support of the Permanent Representation of the Kingdom of the Netherlands to the OSCE in Vienna.

Police officers from 9 cantons in the Federation of BiH have been included, and altogether 155 of them went through the training.