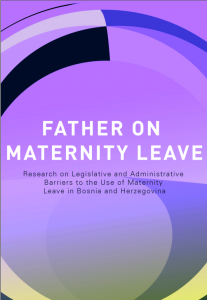 The aim of this research is to determine whether fathers use maternity leave and to what extent, and whether there is space for improving the laws governing this area, as well as public policies that would increase the participation of men in family life. The ultimate goal is to increase the participation of women in the labor market by amending and applying the appropriate provisions of the current laws and implementing public policies aimed at promoting the right for both parents to use maternity leave.

In the first part of the research, we present the legal framework for regulating maternity leave, that is, we analyze the most important provisions of the Labor Law in B&H Institutions, FB&H Labor Law, RS Labor Law and District Brčko of B&H Labor Law, Law on Social Protection, Protection of Civilian Victims of War and Protection of Families with Children (Federation of Bosnia and Herzegovina) i.e. the laws on child protection (Republika Srpska and District Brčko), as well as accompanying bylaws.

In the third part, we analyzed the responses of 500 fathers who were surveyed by the public opinion polling agency and who had a 6 child between 2016 and today,1 as well as the responses of eight fathers who used maternity leave during this period, and who were interviewed in focus groups. We chose this period because it was only in 2016 that this right was guaranteed to fathers as well.