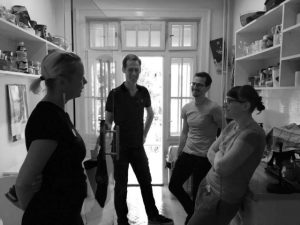 Last year, Elvedin and his partner Michael got married. Unfortunately, not in Bosnia and Herzegovina, but in New York. They asked their guests that instead of buying them wedding gifts, they donate and support the work of Sarajevo Open Center for which we are immensely grateful.

Elvedin was also kind to answer us few questions.

1. How did you and Michael meet?

We met in 2006 in old-fashioned way, through the no longer existing web page called Friendster. We were both living in Boston at the time, doing our postgraduate studies. I was on Organic Chemistry Program in MIT and he was on the Education Program in Harvard. We had some mutual friends so he found my profile. We met in the bar called The Cellar in Cambridge. We spent the entire night talking and getting to know each other. I liked him from the start. He seemed as an open and sincere person and I (still) think that I made the right decision . The relationship progressed slow but steady. We did not plan for it from the start to become something serious. That helped us to grow our relationship because we did not force us to be something that we are not. We liked each other and with the open communication and effort, our relationship grew organically into love, into something deeper and stronger, relatively soon after our first meeting.

As a child, while growing up in Bosnia and Herzegovina, I have always imagined that I will get married and start my family in my 20s or 30s. But as I arrived in the United States in my 15 and committed myself to higher education with 20, I gave up on that dream because I could not imagine that the marriage will ever be something accessible for me. That was big dissatisfaction for me because it made me question myself, my life goals and my priorities.

During the studies I realized that marriage, in a lot of cases, is not that egalitarian institution that my parents were in, but a relationship where woman is often oppressed, where there is no equality of sexes, where housework is often separated to those for man and those for woman. That made me lose my desire to be in that kind of relationship. However, some things changed from 2004 (when same sex marriages were recognized in state of Massachusetts) until 2015 (when it was recognized on federal level).

First of all, marriage became a reality for same sex couples in the US which in turn led to the increase of public awareness, acceptance of those types of relationships and less stigmatization. We also felt a bit of pressure from our friends and family that wished to publicly celebrate our relationship as we did theirs. Second, we decided that we want to have kids through the process of surrogacy and it became obvious that it is much easier to go through the entire process if you are in a legally recognized union. Third, but not less significant, we realized that we can shape our marriage in the ways that we find important.

In the end, I just want to point out that I do not insist that everyone should get married. It is a personal decision for every couple, straight or gay. However, institution of marriage hast to be accessible to all LGBTI people. Separate but equal is not equality, it is a continuation of discrimination of minority group (something that we learned through horrific history of slavery in the US).

When Michael and me got married, we were in relationship for 10 already and we were living together for 7 years. Michael is a professor on City University of New York and I am on subspecialization for intensive care and anesthesiology on Columbia University. We felt comfortable because in that 7 years we managed to settle. Decision to get married was not that simple, especially because a lot of people around the world, including in our country, Bosnia and Herzegovina, do not have the same rights that LGBTI people have in the US. Besides, we also experienced problems with the family and heterosexual tradition. That is why we found it important to remind our friends and family that we live in such a specific place, a place where we are absolutely accepted.

Since I grew in Bosnia and Herzegovina, I have been following and appreciating the work of Sarajevo Open Center for some time so we decided to ask guests that instead of gifts they make their donation to your organization. A lot of our friends and family are financially stable so they were able to donate some money. Of course, this was all on a voluntary basis. It was very important for us to support an organization that deals with these issues in BiH because we want to contribute to the fight for equality of LGBTI people. Also, instead of usual small gifts for our guests we decided to donate money in their name.

If you are able to donate, you should do it. We would recommend it to everyone. It does not have to be organization for human rights of LGBTI people, but we pledge to give our support to people that fight for the rights of minorities.

Why do we need your support?

For the last five years we have been actively and firmly increasing visibility and working to change the state of LGBTI people human rights and women in Bosnia and Herzegovina because their rights are being violated on a daily basis. With your support, we can continue to make a change in Bosnia and Herzegovina and create safe and happy environment. Thank you for your generosity, support and solidarity!

How much to donate?

Any amount of money you are able to contribute.

Money can be donated exclusively through bank transaction

For donations from abroad:

If you need additional information about the way you can support and help us, feel free to contact our executive director Emina Bošnjak on her e-mail [email protected]