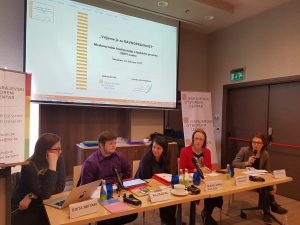 On February 22nd in Sarajevo, International Conference about Human Rights of LGBT People called It Is Time for EQUALITY was held. Aim of the conference was to remind the institutions of B&H their responsibilities and tasks they need to do for the LGBT people to achieve equality in B&H society. This one day conference covered different points of interest for LGBT people in B&H. European, regional and domestic experts participated as well as representatives of Institution of Ombudsman in Bosnia and Herzegovina, Ministry of Human Rights and Refugees, Council of Europe and NGO representatives from Serbia, Croatia and Bosnia and Herzegovina.

Second panel discussion was called Protection of the right to self-determination – Legal recognition of gender identity. Panelists were from Croatia, Serbia, Denmark and Bosnia and Herzegovina. Naida Kučukalić was moderating the discussion. In the opening statements panelists explained key terms related to this topic and presented their experiences regarding gender identity and legal recognition, pinpointed main problems of transgender persons and gave their opinions and views how to solve the problems transgender people face.

Author of Guide Through the Administrative Procedure Required for Registering Sex Reassignment in B&H, Edita Miftari, presented the information she gathered during her research. Aforementioned book has detailed descriptions of current legislation and procedures in B&H regarding the process of sex reassignment, change of official documents and ID number.

Representative of Transgender Europe and Trans Aid Croatia, Ari Kajtezović, talked about the need of separating medical requirements from the procedure of changing sex marker in legal documents. He also talked about the existing mechanism for legal recognition of sex reassignment in Croatia, its good and bad side and mentioned existing practice in other European states.

Slavoljupka Pavlović from Gayten LGBT, Serbia, talked about the problems trans* people face in Serbia while changing sex marker in their legal documents, about the existing gap between legislation and medicine since Serbia is a country with one of the best medical teams that work on sex reassignment. Slavoljupka emphasized the need for enacting law about gender identity that would allow trans* persons to change sex marker without additional medical requirements and while respecting ones right to self-determination.

Linda Thor Pedersen from LGBT Denmark shared her personal experience and stories of trans* people in Denmark and gave an overview of Denmark’s history with human rights of LGBTI people, especially trans* people. Denmark removed the transgender from the list of mental disorders which made Denmark to even surpass World Health Organisation. WHO is yet to make those changes and plans to do it by publishing new The Diagnostic and Statistical Manual of Mental Disorders (DSM). Denmark will continue to cover costs of sex reassignment within standard health insurance, concluded Linda.

Panelists concluded that existing administrative procedures present the biggest obstacle for trans* people and their human rights. Discussion that followed consisted of talking about the need to separate medical from legal aspects of sex reassignment where participants presented their opinions and arguments for or against the idea. Participants also mentioned the need to cover the costs of sex reassignment from regular health insurance and presented the experience of neighboring countries. In the end, everyone present agreed that Bosnia and Herzegovina needs specialized personel who would work on this matter from medical and legal perspective. That would allow trans* people right to recognition of their self-determination and help them through the process of sex reassignment that would, then, be covered by the regular health insurance.