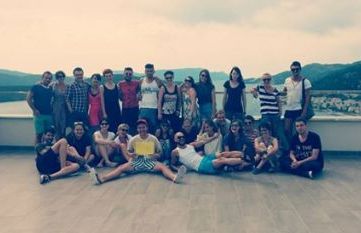 As a part of the project “Strengthening the Capacities of LGBT Activists in the Regional Centers Banja Luka, Tuzla, and Mostar,“ financed by USAID in BiH and implemented by Sarajevo Open Centre, summer school for LGBT Activist had been held in Neum. This summer school followed two previously organized trainings – legal and advocacy one.

The capacity building summer school for LGBT activists took place from August 16th to 20th, 2014 in Neum. The aim of the summer school was to emphasize and share best practices for youth activism in the Western Balkans.

During the multi-day program, LGBT activists had the opportunity not only to listen, but also to actively participate in different ways in the programme of summer school. The program covered the following themes: national mechanisms for the protection of human rights with a focus on BiH, narrowing down missions, visions and principles of human rights protection mechanisms and efficient protection and promotion of human rights in BiH; concrete steps towards decreasing discrimination in BiH in order to protect human rights, organizational cooperation and local actions of LGBT organizations and activists – Activists from Serbia and Croatia contributed with their experience.
LGBT activists also had the opportunity to hear reports about the skills and strategies of project management, as well as to chose a strategy and development of strategic plan.
35 activists from Banja Luka, Tuzla, Mostar, and Sarajevo participated the summer school.
The summer school is part of a series of trainings and workshops being organised this year with the goal of strengthening LGBT activism in the regional centers of BiH in order to promote LGBT human rights in local communities in BiH.