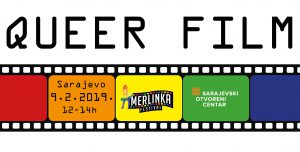 Sarajevo Open Centre invites you to a two-hour workshop on the topic queer film, organized within the 7th International Merlinka Queer Film Festival in Sarajevo. The workshop will be held in Sarajevo on Saturday, February 9, 2019, starting at 12 PM and intended for students of performing arts, but also for anyone who is in any way interested in film and theater.

The workshop will deal with the way in which the queer identity is presented today in the film. The sample will not be queer films whose constructive principle is based primarily on queer themes, but popular, mainstream, series and films of various genres that reach the wider audience and therefore are more important for forming opinions on them.