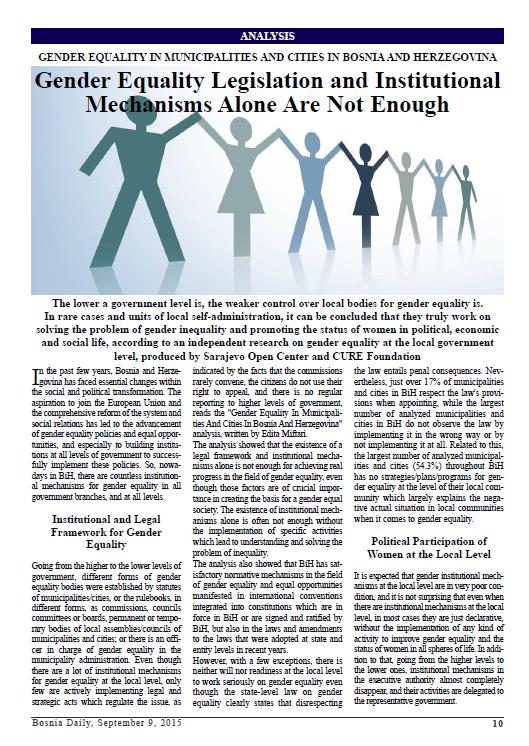 GENDER EQUALITY IN MUNICIPALITIES AND CITIES IN BOSNIA AND HERZEGOVINA

The lower a government level is, the weaker control over local bodies for gender equality is. In rare cases and units of local self-administration, it can be concluded that they truly work on solving the problem of gender inequality and promoting the status of women in political, economic and social life, according to an independent research on gender equality at the local government level, produced by Sarajevo Open Center and CURE Foundation.

In the past few years, Bosnia and Herzegovina has faced essential changes within the social and political transformation. The aspiration to join the European Union and the comprehensive reform of the system and social relations has led to the advancement of gender equality policies and equal opportunities, and especially to building institutions at all levels of government to successfully implement these policies. So, nowadays in BiH, there are countless institutional mechanisms for gender equality in all government branches, and at all levels.

Going from the higher to the lower levels of government, different forms of gender equality bodies were established by statutes of municipalities/cities, or the rulebooks, in different forms, as commissions, councils committees or boards, permanent or temporary bodies of local assemblies/councils of municipalities and cities; or there is an officer in charge of gender equality in the municipality administration. Even though there are a lot of institutional mechanisms for gender equality at the local level, only few are actively implementing legal and strategic acts which regulate the issue, as indicated by the facts that the commissions rarely convene, the citizens do not use their right to appeal, and there is no regular reporting to higher levels of government, reads the “Gender Equality In Municipalities And Cities In Bosnia And Herzegovina” analysis, written by Edita Miftari.

The analysis showed that the existence of a legal framework and institutional mechanisms alone is not enough for achieving real progress in the field of gender equality, even though those factors are of crucial importance in creating the basis for a gender equal society. The existence of institutional mechanisms alone is often not enough without the implementation of specific activities which lead to understanding and solving the problem of inequality.

The analysis also showed that BiH has satisfactory normative mechanisms in the field of gender equality and equal opportunities manifested in international conventions integrated into constitutions which are in force in BiH or are signed and ratified by BiH, but also in the laws and amendments to the laws that were adopted at state and entity levels in recent years.

Political Participation of Women at the Local Level