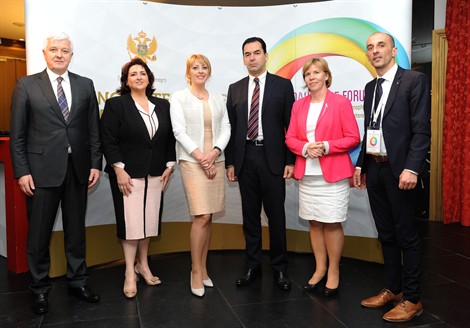 The forum, organised on the occasion of the International Day Against Homophobia and Transphobia, brought together more than 230 representatives from Montenegro and abroad, including: Serbian Minister without Portfolio Jadranka Joksimović, Minister of Public Administration of Croatia Arsen Bauk, Finland’s Minister of Justice Anna-Maja Henriksson, Minister of Education, Culture and Science of the Netherlands Jet Bussemaker, Minister for Social Dialogue, Consumer Affairs and Civil Liberties of Malta Helena Dalli and Minister of Culture and Democracy of Sweden Alice Bah Kuhnke.

IDAHO Forum 2015 was attended by high-level delegation from the following countries: South Africa, Italy, Slovenia, Slovakia, Albania, Kosovo, Bosnia and Herzegovina, Iceland, Luxembourg, as well as from international organisations such as the European Union, Council of Europe and OSCE.

Following the meeting, ministers and deputy ministers from Montenegro and the region, including Bosnia and Herzegovina signed the Joint Statement. Dušan Marković, Deputy Prime Minister for political system, foreign and interior policy stated that “In order to strengthen these efforts, regional ministers joined us in the signing the Joint Statement on Ending the Violence and Hate Crime Against LGBTI People, that will be signed tommorow on the ministerial meeting, and jointly promote the equalilty, diversity and inclusion of LGBTI people.

On behalf of BiH, Joint Statement was signed by Nezir Pivić, the Deputy Minister of Justice BiH.