These three girls are educated, accomplished and have careers they began to build. But does not that right belong to all of us? The three of them made a step forward and are very aware of it. It did not just happen so easily.

Aldijana, Admira and Dalila. They are young, educated and successful girls from different parts of Bosnia and Herzegovina. Dalila graduated from the Faculty of Traffic and Communications and works in Kakanj Municipality, Aldijana works for the OSCE Mission to BiH and she graduated from the Faculty of Political Sciences in Sarajevo at the Department of Social Work, and Admira should become graduated psychologist in the next couple of years. These young women, along with many other things, are linked by their national identity. All three are Roma women. With their social roles, they are role models for the entire community, and at the same time, they are members of a new generation of young Roma people, and above all Roma women in BiH.

All three agree on one thing: opportunity is not enough for success, but it is very important to have it… The three of them were given the opportunity and they took it to the maximum. Does this tell us something?

These young girls managed to avoid every trap of multiple discrimination. Unfortunately, many of their peers did not. Many suffer because of the fact they are Roma people, but also because they are women, especially those who are economically completely dependent on their parents, and later on their husbands. There are many examples of open intolerance towards Roma people, especially towards Roma women. We remember the case of Senada Alimanović, after which the film “Episode in Life of the Ironmonger” was created. Many are victims of triple discrimination. They are victims of insults and hate speech while they are begging on the streets, but they are also victims when they return to their homes.

These three young women are completely equal with all their peers. Thanks to commitment and serious understanding of education, today they are what they are!

Dalila openly talks about how her degree opened the door for her and how it “made her feel equal and accepted in society”. On the other hand, she says she never considered herself as different from others, nor did she want to have some privileges, although many thought she had them.

“I have always fitted into society without emphasizing my nationality, because I do not think it should be the subject of socializing or any kind of interpersonal relationship”, says Dalila.

“In my opinion, education today is not the only requirement for being equal in a society. I think that when you are genuinely advocating and fighting for certain things and when people are able to recognize that, they will appreciate you more and consider you equal”, says Aldijana.

Admira says that besides the will, persistence and opportunities provided, the support from parents is also needed, and in her case, it seemed to be crucial.

“When it comes to education, in my opinion, that is one of the most important needs of a person, but it all depends on the family and the environment in which you are living. Thanks to my parents, I graduated from the Medical High School, and then enrolled in the Faculty of Business Psychology”, says Admira.

All this helped her to become a member of the Commission for Gender Equality at the City Council of Tuzla, commissioner of local community Mosnik, president of the Association “Euro Rom” from Tuzla, as well as the correspondent of the Roma portal Udar.

Unlike many of their peers, these three girls made a big step forward, not only when talking about education, but also in the social vertical. Only from such a position it is possible to observe the position of the Roma woman today. There is no doubt that many women around them are in the same position in which their grandmothers were.

“A woman should work on her own personal improvement on a daily basis, and never fall into everyday routine. A woman needs to invest in her own culture, and a home upbringing also plays an important role so she can transfer it to her descendants someday”, she says.

Admira thinks that the Roma woman has little space to directly influence the development of the family. On the other hand, she claims that there is an increasing number of girls who are educated. She is a great optimist and deeply believes there will be more and more girls who will be able to fight for their rights, primarily within the family itself, and then in the society. 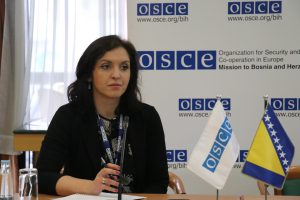 Aldijana, as a feminist, says she often uses the phrase that Roma women are discriminated on a number of grounds and that she stands very firmly behind it, because no matter how educated and capable they are, the Roma women must make every effort to prove that nothing is “given” to them because they are Roma women.

“My personal experience is that in many of my jobs, I have always been accepted on the basis of my qualifications. Soon, my efforts and quality of work were recognized, so some of my associates admitted that they did not believe I would be able to do the job. Therefore, they respect me, my work and results even more now”, says Aldijana.

Dalila believes that the opportunity must first be given to the Roma people.

Do we hate Roma people?

It is very difficult to give a simple answer to this question because it would be wrong to say “yes, we hate them”, but it would probably be disputable if we denied it. Or maybe we are just indifferent, or simply, not thinking about them and their needs. Who can know…

For Dalila, the word hatred is too strong, but she believes that non-acceptance and rejection are very much present. She believes that it is still strange and surprising for our society when someone from Roma community achieves some results, even if that is only about enrollment or completing the faculty.

Admira thinks similarly… She says hatred does not exist, but Roma people are not equal citizens of Bosnia and Herzegovina.

Unlike Admira and Dalila, Aldijana still believes that hatred exists, but it is hidden. She believes that the majority of the population does not know the Roma people and that this hatred stems from the ignorance and fear of accepting something different. She says that our society is so distorted in her eyes, because instead of celebrating the differences of people in the country we live in, we just make divisions of “ours”, “yours,” “theirs”…

Could it be without prejudices and stereotypes?

As in previous question about hatred, here is also very difficult to give a simple answer. Stereotypes, especially prejudices, are deeply rooted in each of us. They are not specific to a particular group, but they are characterized by being strong and we “feed” on them from very young age. There are very few people that do not use the word “ciganluk” or that Roma people are people who does not want to work. Besides that, there is a whole series of various stereotypes and prejudices about Roma people. These three girls seek to eliminate every attempt to stereotype Roma people, especially Roma women, and with their positions in the society, they certainly influence tearing down the wall made of stereotypes.

Dalila firmly believes that there would not be so many stereotypes and prejudices if each of us would be an example to his/her local community by being fair, educated and successful in what he/she does. She graduated from Faculty of Traffic and Communications, but says she would be equally successful in any other job with her personality.

“I have to point out my persistence, perseverance and resourcefulness. Those are the qualities I would like everyone to have. If my choice was a craft, I think I would be a successful hairdresser, trader or anything else. I never gave up after the first obstacle or failure. I have always had a developed strategy to reach the ultimate goal”, she says.

Aldijana believes that “the cure for prejudices” is precisely the promotion of positive stories about people from Roma communities, who have joined the society, but without losing their identity.

On the other hand, Admira thinks that this must be dealt with systematically. She says that it is necessary to work on changes in the education system, and increase the participation of Roma people in it, which will destroy the prejudices and stereotypes imposed in a discriminatory society.

“My motivation for education and training within the education system has helped me and my community in breaking stereotypes and prejudices, and my knowledge allowed me to use it for the fulfillment of civil rights of all Roma people, because even after my education, I continue to think and work on solving the Roma issue both in my community and in society”, says Admira.

These three girls are educated, accomplished and have careers they began to build. But does not that right belong to all of us? The three of them made a step forward and are very aware of it. It did not just happen so easily. Nobody chose them, but everything began a lot earlier in their families where the values were being implanted. They are aware of them, and all that they have achieved so far and the way they came to it do not hide for themselves. On the contrary, they are aware that they have the responsibility as someone who is a role model for the entire community and, therefore, share their experience with others.

All three believe that young people are lacking boldness and courage to do something that no one else did. To follow their dreams, to get out of the circle and to take advantage of all the possibilities. To engage, volunteer, accept responsibility, run themselves and the community, and fight with all the obstacles they find in their way. It sounds like a big phrase, does not it?

Whoever reads this and feels like it is impossible, feel free to talk to Aldijana, Admira or Dalila.

Finally, these women see themselves in the future as very successful in their jobs, Dalila even with another degree. Different understanding of the future, but all are linked by the vision of a successful future, both business and private.

In the end, in case you have forgotten, let us remind you: Aldijana, Admira and Dalila. They are young, educated and successful girls from different parts of Bosnia and Herzegovina. These young women, along with many other things, are linked by their national identity. All three are Roma women.

The text was created as a part of the project “Protection of Marginalized Communities: Improving the Implementation of the Regulation on Hate Crimes in Bosnia and Herzegovina”, implemented by the Sarajevo Open Centre in cooperation with the OSCE Mission to BiH, financially supported by the Permanent Mission of the Kingdom of the Netherlands to the OSCE in Vienna.