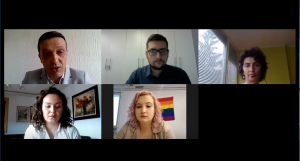 One year after the European Commission issued the Opinion on the Application of Bosnia and Herzegovina for European Union membership, citizens of BiH are waiting for concrete steps by local authorities in the direction of meeting the priorities set out in Opinion.

In order to returning the focus to the EU accession process, especially in terms of strengthening democratic institutions, ensuring the progress in law and protecting human rights, the Initiative for Monitoring the European Integration of Bosnia and Herzegovina held an online event on June 17 entitled “BiH and the EU: What do we want to see”.

Rasim Ibrahimagić, a representative of the Initiative for Monitoring the European Integration of BiH, emphasized in the introduction that the Opinion was accompanied by an Analytical Report which included details and a complete overview of all chapters that await us during the negotiations, however, the 14 priorities are crucial for obtaining candidate statusof BiH. In October last year, the Council of Ministers of BiH adopted an Action Plan that aimed to target certain recommendations from the Analytical Report, but which, unfortunately didn’t cover 14 key priorities.

Rasim mentioned that civil society has recently been working on a document that is a kind of alternative action plan for the implementation of the recommendations of the European Commission from the Opinion, which is currently being finalized. The aim of the document is to bring back into focus issues that must not remain in the background due to the current situation with the Covid-19 pandemic. Initiative for Monitoring the European Integration of BiH will soon publish an Alternative Action Plan, as well as several other publications that address specific issues related to BiH’s European integration in order to return this topic to the focus of institutions, but also to make the European Union aware that civil society has partners.

Denis Čarkadžić from UG Zašto ne said that BiH’s path to the European Union so far has been more formal than essential. He used the example of elections as a setback in the progress of human rights.

The topic of access to justice for victims of sexual war violence remains important in BiH, as victims are still not adequately protected 25 years after the war. Berina Žutić Razić from TRIAL International in BiH spoke about the problems faced by victims, including a legal framework that does not work in reality. The lack of systemic solutions is clearly demonstrated through the lack of an effective reparations system. She also emphasized that the institutions do not have the empathy to understand the position of the victim and that this issue has also become politicized.

Vladana Vasić, Advocacy Manager at the Sarajevo Open Centre, spoke about the main problems related to gender equality and the rights of LGBT people: lack of women in decision-making positions, lack of protection against domestic violence, maternity rights, protection of workers, sexual and reproductive rights .

In his closing remarks, Rasim noted that this event was used to raise at least some issues important for the European integration process, but that importance will be given to all other issues in the field of democratic functioning of institutions, rule of law and public administration reform through Alternative Action Plan for implementation of priorities from the Opinion of the European Commission.