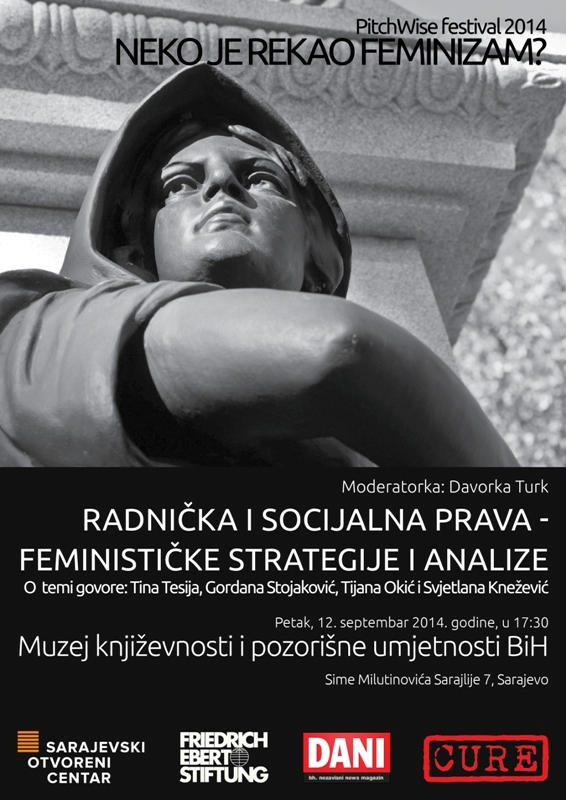 PitchWise festival and the series of lectures Somebody Said Feminism? are inviting you to the lecture Labor and social rights, feminist strategies and analyses.

Sarajevo Open Centre with the partner support of the Friedrich Ebert Foundation – Bosnia and Herzegovina, the CURE Foundation and the media support of the magazine DANI is organizing feminist talks about the strategies and analyses related to labor and social rights as a part of the series of lectures Somebody Said Feminism?. The participants will talk about the topic from current, critical, analytical and practical perspectives, and the audience will be able to actively participate in the discussion. The topic is going to be discussed by: Tina Tesija (Zagreb; the Organization for Worker’s Initiative and Democratization and the Women’s Front for Labor and Social Rights), Gordana Stojaković (Novi Sad, S.T.R.I.K.E. Association), Tijana Okić (Sarajevo, political philosopher, Marxist feminist theoretician and activist) and Svjetlana Knežević (Zagreb, Ready to Work). The moderator will be Davorka Turk (Center for Nonviolent Action, Sarajevo/Belgrade).

Gordana Stojaković (1957) is a member of several women’s organizations (Novi Sad Women’s Center, Women’s Travelling Theater, the CikCak Initiative, S.T.R.I.K.E and Gender Studies Alumnae). She is the leader of the Renowned Women of Novi Sad project (1999-2013). As a part of this project, a comprehensive documentation on the history of the women’s resistance in Vojvodina and biographies of renowned women were gathered in the last ten years. She received her BA in Tourism from the Faculty of Sciences at the University of Belgrade (1980). She specialized in gender studies at the ACIMSI Center for Gender Studies at the University of Novi Sad (2005). She received her PhD with the topic Gender Perspective in the Newspaper of the Women’s Antifascist Front from 1945 to 1953 (2011). She published numerous publications among which are the Renowned Women of Novi Sad I (Novi Sad, 2001); Women’s Antifascist Front of Vojvodina from 1942 to 1953 (Novi Sad, 2007); Solidarity or Liking; the Journal of a Feminist about Feminism and the Left Wing in Serbia (1978-2007) (Belgrade, 2011), Prostitution in Serbia – One of the Potential Sides (Novi Sad, 2013), Women in New Professions 1945- 1950: an Overview of Everyday Life of Women through the Press of the Women’s Antifascist Front in: Political Use of the Past – about the Historical Revision of the Post-Yugoslav Region (Novi Sad, 2014). She was awarded with the annual recognition in the field of gender equality by the Executive Council of the AP of Vojvodina (2008).

Tijana Okić was born in Sarajevo in 1986. She finished elementary school in several different schools amidst the war circumstances of her native country, SFRY. She graduated from high school in Makarska. She obtained her BA in Philosophy and Sociology and then her MA in Philosophy at the Faculty of Philosophy in Sarajevo. She is enrolled in PhD studies at the same faculty. Tijana thinks, lives and works in Sarajevo. She is socially active and is interested in ethics, political philosophy, Marxist and feminist theory.

Tina Tešija graduated from the Faculty of Humanities and Social Sciences in Zagreb in Sociology. She worked as a project leader and collaborator on the educational program at the Zagreb Center for Women’s Studies. She is currently working for the regional web portal Bilten. She is an activist of the Organization for Worker’s Initiative and Democratization and the Women’s Front for Labor and Social Rights. She is a member of the Feminist Front of Zagreb. Her areas of interest include feminism and the protection of labor and social rights.

Svjetlana Knežević is a feminist, an activist and a journalist. She received her MA in Journalism at the Faculty of Political Science in Zagreb. She is a member of the editorial staff of Libela – a web portal about gender, sex and democracy, a longtime editor and host of Expanding the Area for the Battle – a show about human rights and activism at Radio Student and the coordinator and co creator of the initiative Ready to Work which deals with the position of young women in the business world. Her primary interests include gender, class and activism.

Davorka Turk is an activist and feminist from Zagreb living in Sarajevo. She works at the Center for Nonviolent Action. Sheis engaged in the issues of war, peace, national identity and the past of the Yugoslav nations, and she is also interested in cooperation and solidaritywhichcross those set boundaries.