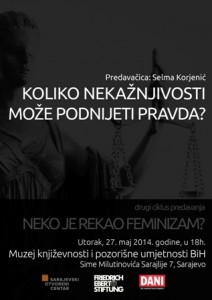 Sarajevo Open Centre, with the help of our partners Friedrich-Ebert-Stiftung in Bosnia and Herzegovina and magazine DANI, from May till November, will organize six lectures and the topics will include: impunity, militarization, motherhood, employment and social rights, contemporary Bosnian and Herzegovinian film art, and solidarity and responsibility of feminist initiatives in BiH.

How much impunity can justice survive?

We would like to invite you to the first lecture in the second lecture series Someone said feminism?, which will be given by Selma Korjenić on the topic: How much impunity can justice survive? During the lecture the discrepancies between the legal and the social frameworks for the protection of survivors of wartime sexual violence and their everyday realities will be discussed. To what extent is it possible to talk about justice in situations in which the survivors of wartime sexual violence still daily run into the perpetrators? How does the state turn survivors into victims of the system meant to protect them, and the culture we live in sentences them to a life in fear and silence, with stigma and shame?

There will be an open discussion of these and similar questions after the lecture.

About the lecturer: Selma Korjenić works at TRIAL as a human rights associate where she manages a program of support for wartime sexual violence survivors in BiH. After graduating from the Faculty of Political Science at the University of Sarajevo she completed her Masters degree with a thesis: Family and Society. She has more than nine years of experience of working on research projects exploring the causes and consequences of the 1992-1995 war in BiH, including the projects: Human casualties in BiH 1992-1995, The Oral History Project – Positive stories, during which she worked as a project coordinator at the Research and Documentation Center in Sarajevo (IDC). She is a co-author of a publication, Heart Signals, published in 2010. She has specialized in work with victims by attending numerous renowned seminars (The School of Transitional Justice in 2006, The Oral History program at the Columbia University, the Life Stories and Dialogue seminar that was a part of CIPS). She has a Medica Zenice certificate that she has completed their educational workshops on communication, psychological trauma, dealing with traumatic experiences and emergency interventions.