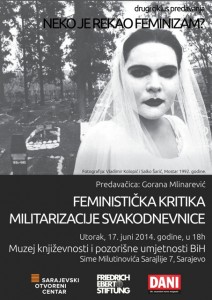 Sarajevo Open Centre, with the help of our partners Friedrich-Ebert-Stiftung in Bosnia and Herzegovina and magazine DANI, from May till November, will organize six lectures and the topics will include: impunity, militarization, motherhood, employment and social rights, contemporary Bosnian and Herzegovinian film art, and solidarity and responsibility of feminist initiatives in BiH.

Feminist critique of militarization of the everyday

We would like to invite you to the second lecture in the second lecture series Someone said feminism? which will be given by Gorana Mlinarević on the topic: Feminist critique of militarization of the everyday. The lecture will explore what happens with militarism in neoliberal capitalism in which the concept and the role of state, with which we generally associate the term militarization, is taken on by global corporations. The question of how feminism can contribute to discussions of invisible militarization of the everyday will be canvassed, as well as whether women can change the paradigm of army by joining it, and whether civilians can be completely controlled under the banner of national security, as has been the case in the fight against terrorism.

There will be an open discussion of these and similar questions after the lecture.

About the speaker: Gorana Mlinarević is an activist and a feminist. She currently works as a researcher on a Gender of Justice project at Goldsmiths College University of London. She has extensive experience of researching questions related to women in war and postwar contexts.