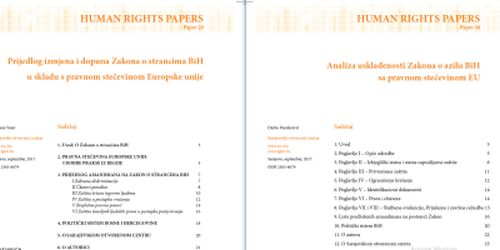 In the following period, Sarajevo Open Centre planed series of advocacy activities towards amending laws that regulate asylum and foreign people in BiH. The aim of those activities is to ensure adequate recognition and protection of minorities but to ensure better alignment with EU acquis as well. SOC was active in passing these laws and part of amendments proposed by SOC were included in the new laws.

With the aim to improve provisions in this Law, Sarajevo Open Centre is preparing publication about analysis of existing solutions and their alignment with relevant EU Directives. In the conclusion of this analysis, amendments to the existing laws are presented. These amendments are aimed towards better definitions of terms social group, which would include sexual orientation and gender identity. Other changes are about provisions that would ensure that asylum seekers are properly informed about their rights on their native language, legal aid, and health protection. One of the focuses of these amendments is to define clearly role of civil society organizations in this process, that is, to provide means for CSOs to help marginalized groups and provide psychological support because they know best what are the needs of those people.

Law on Foreigners was passed in the end of 2015. In this case as well, sexual orientation and gender identity are not included. Neither are same sex partnerships included as a basis for receiving temporary stay in BiH, or exercising other rights that are guaranteed for marital or extra-marital partners of citizens of BiH. This law is not completely aligned with relevant EU Directives that regulate this area. Changes to existing law are needed in order to avoid conflict with legislations of other EU Member States and to avoid human right violations of citizens from BiH or foreign countries.

SOC has prepared analysis for Law on Foreigners with amendments that would serve for advocacy towards members of parliament and other institutions. In this analysis focus is on including sexual orientation and gender identity in forbidden grounds for discrimination, provisions about human trafficking, ensuring adequate protection for victims of human trafficking and aligning provisions that regulate deporting foreign citizens with EU Directives as well as provisions that regulate legal aid.