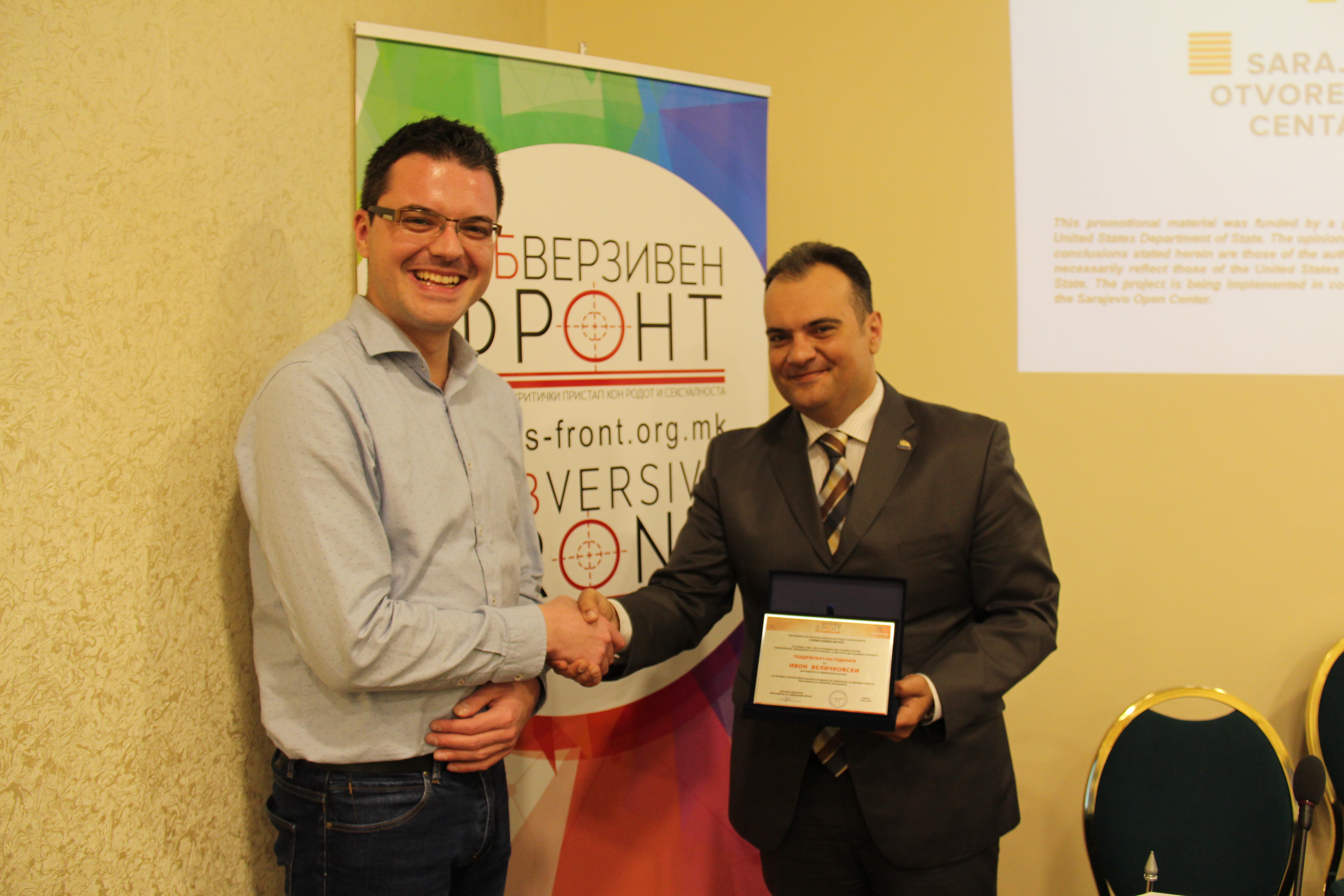 Sexual orientation has been noted as a fairly new concept in human rights law and practice and a point of stark contention in daily political discourse. The guiding principles of the human rights approach on sexual orientation relate to equality and non-discrimination. Non-existing legislation for protection of sexual minorities has posed to be an issue in Macedonian society. The Constitution of the Republic of Macedonia guarantees the protection of civil and political freedoms and rights with regards to the equality of citizens regardless of sex, race, color of skin, national and social origin, political and religious beliefs, property and social status.[i] However, this essential document does not contain provisions guaranteeing the right of citizens regardless of their sexual orientation, gender identity (or other status).[ii]

The various legal and institutional reforms which have been conducted throughout the years in Macedonia have given way for challenges to the rule of law. An increased number of new laws and amendments of the laws in summary procedures have an impact on Macedonia’s legal and institutional framework, implementation and practices with regards to the principle of equality and protection against discrimination.

Having regard to LGBTIQ rights and anti-discrimination practices, Macedonia has greatly evolved since its independence from Yugoslavia in 1991 as it has accepted values of rule of law and respect for fundamental human rights in its transition to a democratic system. However, the legislation in Macedonia is very poor in implementing non-discrimination provisions on sexual orientation and gender identity in the areas of employment, access of goods and services, other spheres of life, military, health, assembly and asylum, moreover there are no provisions concerning LGBTIQ people.[iii]

In order to better understand the nature of the laws guiding the above-mentioned issues, Macedonian laws can be grouped in three groups, namely the first one containing laws where sexual orientation is explicitly stipulated[iv], the second one containing laws which include the open-end clause, and the third one in which sexual orientation is not explicitly stated nor does it include the open-ended clause[v].

A part of the key Macedonian laws, including the Law on Protection of Patients’ Rights, the Law on Public Health, the Law on Higher Education, and Law on Audio and Audio-Visual Services are contained within this first group of national laws. Under these laws, it is explicitly stipulated that an individual has the right to realize his or her right without discrimination on the basis on sex, race, color of skin, gender, language, religion, political or any other thought, national or social origin belonging to a national minority, material position, origin by birth, sexual orientation or any other status. Additionally, it is unambiguously legally stipulated that audiovisual commercial communication should not in any way participate or promote any kind of discrimination on multiple bases including sexual orientation. However, in the provisions under both the Law on Labor Relations and the Law on Volunteering, there are linguistic misconceptions present with regards to the difference between the Macedonian and English translations of the law in which ‘sexual orientation’ is expressed as ‘sexual inclination.’ Thus, it is evident that this terminology is of discriminatory nature as it refers only to the sexual act, not including all aspects of the sexual orientation.

The Criminal Code provides the general rules for meting out of a sentence in which it is stipulated that the court must consider whether the crime has been committed against a person or a group of persons or property, directly or indirectly, because of a myriad of factors including belonging to a marginalized group or any other ground foreseen by law or ratified international agreements.[vi] In this case, although sexual orientation and gender identity have not specifically been mentioned, the monist nature of the Macedonian state could allow them to be included under the aforementioned grounds for discrimination. However, it has been noted with concern that hate speech provisions are not included in the Criminal Code, especially with respect to hate crime that incorporates crimes based on sexual orientation, and discriminatory rhetoric has not been condemned by relevant authorities. Therefore, although crimes based on personal characteristics may be interpreted so as to include sexual orientation, the LGBT community lacks sufficient protection. Furthermore, the Law on Courts, the Law on Personal Name, the Law on Execution of Sanctions, the Law on Child Protection, the Law on Mental Health as well as the Law on Equal Opportunities for Women and Men all prohibit discrimination, but even though not specifically referring to sexual orientation, the open-ended clause allows for several other grounds not covered by the specific provisions.

The last category of national laws, in which sexual orientation is not explicitly mentioned and the laws in which the discrimination provisions allow for an open-ended clause could be argued to be the least advantageous to the members of the LGBTI community. It is of particular importance to refer to the Law in Prevention and Protection against Discrimination which as Lex Specialis on the discrimination towards the other laws that contain non-discrimination provisions, it does not regulate explicit provisions for Sexual Orientation and Gender Identity (SOGI). However, laws that could be considered important for SOGI issues include the Law on Social Protection, the Family Law, the Law on Secondary Education, the Law on Voluntary Finances Pension Insurance, the Law on Health Protection, the Law on Housing and others.

Having analyzed the national legal framework which addresses LGBTI rights and anti-discrimination, it is of crucial importance to look at the broader scope and evaluate Macedonia’s progress on this matter in terms of its accession to the European Union. Since the issue of the prohibition of discrimination on the basis of sexual orientation has been of increasing importance in the past few years when it comes to assessing alignment of national legislation with the acquis communautaire, non-member EU countries, such as the Republic of Macedonia, aspire to achieve full pre-accession alignment. However, it is essential to note the ILGA – Europe Rainbow Map Index 2016 which reflects the national legal and policy human rights situation of LGBTI people in Europe where Macedonia’s score of 16% was the lowest percentage among the former Yugoslavian countries.[vii] Therefore, judging by the subsequent annual country reports published by the European Commission in which further progress is entirely necessary with regards to safeguarding the all-round protection of fundamental human rights of the members of the LGBTI community in Macedonia, there remains much room for improvement.

[i] Constitution of the Republic of Macedonia http://www.wipo.int/edocs/lexdocs/laws/en/mk/mk014en.pdf

[iv] The gender identity had not been included in any law

[v] Bogdanovska, Aleksandra. “Analysis of the anti-discrimination legislation in the Republic of Macedonia in relation to sexual orientation and gender identity” http://s-front.org.mk/wp-content/uploads/2016/12/Analiza-ENG-UberFinal-CIP-Korica.pdf

[vi] Article 39 from Criminal Code (Official Gazette of the Republic of Macedonia No. 114/09) http://legislationline.org/documents/action/popup/id/18559