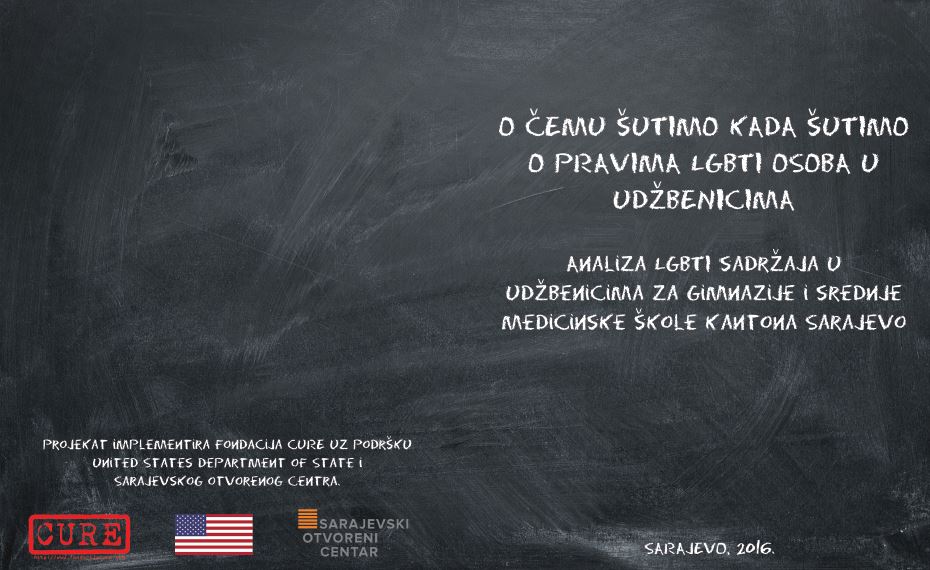 CURE Foundation in 2017 continues the implementation of the project entitled “Utilization of the EU integration process for the improvement of LGBT rights in the Western Balkans” with the financial support of the Sarajevo Open Centre and the State Department of the United States. As part of this project in 2016, we made an analysis entitled “What we are silent about when we are silent about the rights of LGBTI persons in textbooks” where the high school textbooks in Canton Sarajevo were explored and a large number of stereotypes and prejudices in the context of the rights of LGBTI people was observed. With the analysis of teaching content in high school textbooks approved for use in the Canton Sarajevo in the academic year 2015/2016, we wanted to show how and to what extent are the contents from a wide range of LGBT issues and rights presented in the textbooks. As the equal right to access to education, is one of the main pillars of a democratic society as the European Union aims to create in a transitional societies such as BiH, and as the cooperation in the development of policies in education is the basic principle on which the states of the European Union as operating, when it comes to improving the educational system, CURE Foundation has decided to take best practices from the region and begin the process of advocacy towards institutions with a  goal of modification of discriminatory content in textbooks for primary and secondary education in Canton Sarajevo when it comes to LGBTI people, one of the most discriminated social categories.

In cooperation with the Sarajevo Open Centre, the members of CURE Foundation decided to write recommendations and proposals for changes to the text that is marked as non adequate, and deliver the “finished product” to the government structures concerned with this issue, especially the Ministry of Education, Science and Youth of Canton Sarajevo. After two months of research and writing and designing appropriate terms and ways of inserting a positive and non-discriminatory content and eject out-dated, inaccurate and stereotypical content of existing texts, we sent an official letter to the address of 11 Ministries of Education in FBiH, including the Federal Ministry for Education and Science with the aim of informing them about the on-going process and invoking the responsibility of individual ministries. On everyone’s surprise, even seven ministries responded to our letter, but the answers contained the already famous statement “The requested is not in our jurisdiction”, although the letter clearly stated that they are only informed about the process of change that has started, and the ministry from which we are still for the answer has not yet responded to the letter.

The Federal Ministry of Education of BiH has risen to meet our initiative, and the person in charge of the textbook policies has actively participated in running the processes and on their own initiative they sent our letter to the publishing house Sarajevo Publishing, which is a major publishing house for the individual analysed textbooks, to notify their authors about the content which is subject to change and the printing of future editions of this house will be amended. After learning about these actions of the government, CURE Foundation has recognized the importance of work and perseverance and will during the second year of the project insist on moving forward when it comes to removing discriminatory content aimed at LGBTI persons from textbooks for primary and secondary school in Sarajevo Canton.