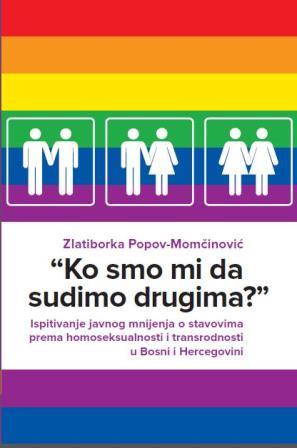 The Heinrich Boll Foundation – BiH, the CURE Foundation, and SOC are implementing the project: “Coming Out! Advocating for the Promotion and Protection of LGBT Rights,” financed by the European Union. Part of the project is a quantitative research project done throughout BiH in order to better understand the reasons behind homophobia/transphobia and discrimination on the basis of sexual orientation and gender identity in BiH. This public opinion research project was completed using the responses from 1010 participants. All the results are presented in the book, “Who are we to Judge Others? A Public Opinion Survey on Opinions About Homosexuality and Transgenderism in BiH.” The book also includes a thorough analysis of the results in a Bosnian context.

The research showed a very low level of sensitization throughout the general population towards lesbians, gays, bisexuals, and transgender (LGBT) people, as well as insufficient knowledge about the problems that LGBT people face. 56.5% of the respondents said that “homosexuality must be cured,” which is evidenced by a lack of knowledge and entrenched stereotypes about homosexuality, which was removed from the list of illnesses and social disorders. For three fourths of the respondents, same-sex kissing in public is unacceptable, whereas having a sex change is considered repulsive by 59.5%. A certain degree of tolerance of LGBT people can be assumed considering the fact that more than 90% of respondents said that they would not use physical or verbal violence against LGBT people. 75.6% said they wouldn’t stand and watch passively; they would help an LGBT victim of violence.

The public opinion survey showed the gender and education are the most important factors that affect a person’s level of homophobia. Women have considerably more liberal opinions about homosexuality compared to men, as well as do those who live in urban settings as compared to those who live in a rural environment. If you take age into account, younger participants are a lot more tolerant and open towards LGBT people than older participants.

This publication is a valuable starting point for those who want to pursue research with the aim to further sensitize the public to the rights and needs of LGBT people. The publication is a crucial database for analysis and recommendations for everyone who deals with LGBT issues in BiH.