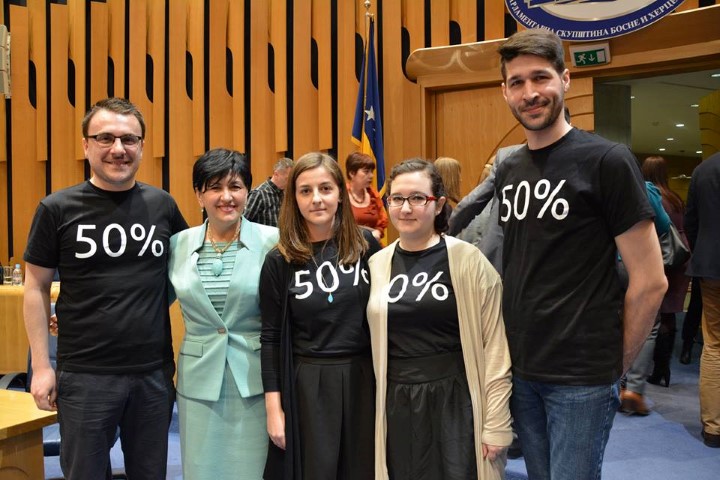 At the ninth session of the Gender Equality Committee of the House of Representatives of the Parliament of Bosnia and Herzegovina the Draft Proposal of the Framework Law on Treatment of Infertility by Assisted Reproductive Technology and the Law on the Changes and Amendments of the Electoral Law BiH were discussed. Of the nine members of the Committee seven were present at the session.

There was a heated discussion over the Draft Proposal of the Framework Law on Treatment of Infertility by Assisted Reproductive Technology, which lead to its eventual adoption (4:3 votes) and the agreement to submit it for further consideration. The Draft Law is a result of tireless work by the best medical experts and it aims to regulate this area of law in order to enable couples and women who cannot conceive naturally, to have access to Assisted Reproductive Technology in order to be able to have a family as guaranteed to them by the Constitution.

The Law on Changes and Amendments of the Electoral Law of Bosnia and Herzegovina predicts that there needs to be an equal number of male and female candidates, listed interchangeably, on the initiative of Sarajevo Open Centre was made. The members of the committee who were present unanimously agreed that this amendment needs to be adopted and forwarded for further consideration. They stressed that this is their response to the Working Group’s amendments to the Electoral Law, which aim to eliminate the provision that specifies the distribution of candidates on the list. In practice this means that it would be possible for a ballot to be valid if the first 12 candidates were men, and the last eight were women. The Committee considers that this would be regressive in terms of gender equality and women’s rights and that it would result in lowered representation of women in elected bodies.

52% of BiH citizens are women and women make up only about 20% of delegates in government bodies. If the 50% amendment were adopted it would lead to a higher number of elected women, but it would also pave the way for Bosnia and Herzegovina to enter political history as one of the first European Countries to have its government reflect true and substantive gender equality. The amendment is also important because it will provide a further incentive for the political parties to have a better pool of women candidates.

These two proposals will be forwarded into the Parliamentary Procedure of the House of Representatives of the Parliament of Bosnia and Herzegovina.