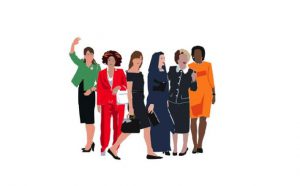 Half a year after the General Elections in 2018 in Bosnia and Herzegovina, the executive bodies for the forthcoming four years have been formed in the Republika Srpska and seven cantons, while the new composition of the Council of Ministers of B&H, the Government of the Federation of B&H and three cantons (Tuzla Canton, Herzegovina – Neretva Canton and Canton 10) haven’t been formed yet.

However, in the eight governments that have been appointed so far, the tradition of unequal representation of women has continued – no government has achieved 40% women representatives from Article 20 of the Gender Equality Law of B&H. This law obliges state bodies at all levels of government, as well as bodies of local self-government, to ensure equal representation of the genders in a percentage of at least 40%, and the situation when this percentage is not realized is considered discrimination based on gender.

In the cantons where governments have been formed so far, one woman has been appointed prime minister (Bosnian – Podrinje Canton). It is also the government with the highest percentage of women – 33.33%. Representation of women varies from 9% to 25%, with the largest number of women in ministries being Canton Sarajevo (three female ministers), two female ministers in Posavina Canton and Bosnian – Podrinje Canton, and the rest cantons have one woman each ministry (Zenica- Doboj Canton, Una – Sana Canton, West Herzegovina Canton and Central Bosnia Canton).

The Republika Srpska government has the largest number of women – five of them, but it’s percent (29%) is still far from the necessary 40%.

Although the formation of executive bodies at the state and federal levels and in four cantons is still pending, it can already be concluded that the problem of unequal representation of the sexes in the executive bodies of Bosnia and Herzegovina is still equally present as in the previous years. In the cantonal governments for the period 2014-2018, the representation of women was 12.76%, while in the latest convening it is 16,67%  (without counting cantons in which the Government has not been formed yet).

The Sarajevo Open Centre will initiate a proposal for amendments to the law on governments in B&H at all levels of the organization that would ensure equal representation of the genders in the manner prescribed by the Gender Equality Law of B&H, and in such a way as to ensure equality for the constituent people.