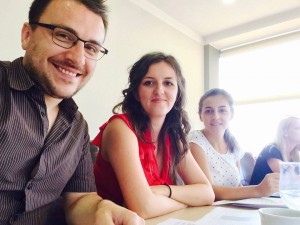 In the last two days representatives of the Initiative for Monitoring the European Integration of Bosnia and Herzegovina have been taking part in the Working group of the Ministry for Human Rights and Refugees that has the task to produce a new Ombudsman For Human Rights Institution Law.

The Initiative for Monitoring the European Integration has got in July 2015 the draft version of the new Ombudsman Law that has been produced until then in the Working group of the Ministry. Our Analysis has shown that the draft version is not in line with recommendations and criteria of international bodies (incl. Venice Commission and ICC). It has been decided that the Initiative will develop a alternative model of an Ombudsman Law. The alternative model of the law is available at the following link.

At the Working group meeting we did present our solutions, focusing on the further expansion but also better definition of the Institution´s competences and the introduction of the new competence, the National Preventive Mechanism. We did propose also that the law should introduce an explicit opportunity to come up with legislative initiatives and initiatives for abstract constitutionality control. Our proposal foresees four ombudspersons in order to avoid the current indirect discrimination of Others. The Ombudspersons will also in future be appointed in the BiH parliament, but the procedures, according to the Initiative´s proposal, won´t be implemented by an ad-hoc but by the (standing) Joint Committee on Human Rights of the parliament. Taking into account the current overlapping of activities and the inefficiency of the current ombudsman structure, our proposal foresees a division of work between the four ombudspersons. Each of them would take over some of the Institution´s competences. BiH would have the following four ombudspersons: ombudsperson for gender equality, ombudsperson for equality of peoples and minorities, ombudsperson for civil and political rights and ombudsperson for democracy and social solidarity. The division would result with clear tasks, and one ombudsperson could not block the other, as it was the case in the past. The alternative model law presents a proposal for a stronger financial independency of the Institution, but also better solutions for the work on concrete citizens complains and the implementation of the Institutions recommendations.

Members of the Working group of the Ministry did show a high interest for the presented solutions so that it has been decided that the Working group will work on relevant changes its current law proposal. The Working group did take over a big number of solutions from the Initiative´s model law, such as the articles relates to the competence and the work on concrete citizens complains.

We believe that the contribution of the Initiative is a big step forward, hoping that the Ministry will continue using our model law our argumentation for the development of a final law proposal that will enter parliamentary procedure. The Initiative will continue following the process.