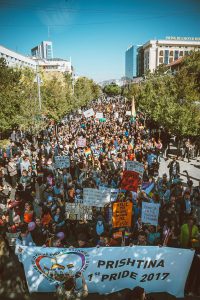 This year, an unprecedented decision was made in Prishtina by the two LGBT rights organizations operating in the country- CEL and CSDG. The decision was for holding Prishtina’s 1 st Pride Parade and Pride Week, also pre- announcing it to the public one week before. To developed countries this may sound like a given, but for a country like Kosovo this meant a lot of exposure to potential harm and backlash. Although there was a lot of hate speech online in social media, and online news portals, the parade was successful- without any incidents. The President of Kosovo Mr. Hashim Thaci joined the parade in its’ beginning- however, other governmental officials like the PM, Ministers, and Prishtina’s Mayor were nowhere to be seen. With some 1,000 people joining the Parade in the main capital city, this was a clear sign to those opposing the LGBT community that times are actually changing, and Kosovo’s society is slowly but surely progressing.

Furthermore, Kosovo is now in the process of amending its Hate Crime Law. What the LGBT rights organizations are trying to do is include Sexual Orientation and Gender Identity as grounds for inciting hate. In Spring of this year, two people were convicted for attacking two male workers of CSDG while they were conducting an outreach visit in the city of Ferizaj- however, because sexual orientation is not included as grounds for hate crimes, it was not taken into account that the attack occurred because of the perceived sexual orientation of the two victims. The EU has continuously emphasized the fact that implementation of human rights continues to be hindered by a lack of resources and political commitment. It has stated that some steps are being taken towards this issue, but difficult challenges remain.

All of this means that Kosovo lawmakers have to make a move now. The uproar during the Pride Parade, and the immense support we’ve received afterwards, means Kosovo’s society is ready to make small but significant changes which will better the lives of LGBT people here. Governmental officials must now take specific actions to ensure LGBT people are protected. Not doing so would be senseless at this point.