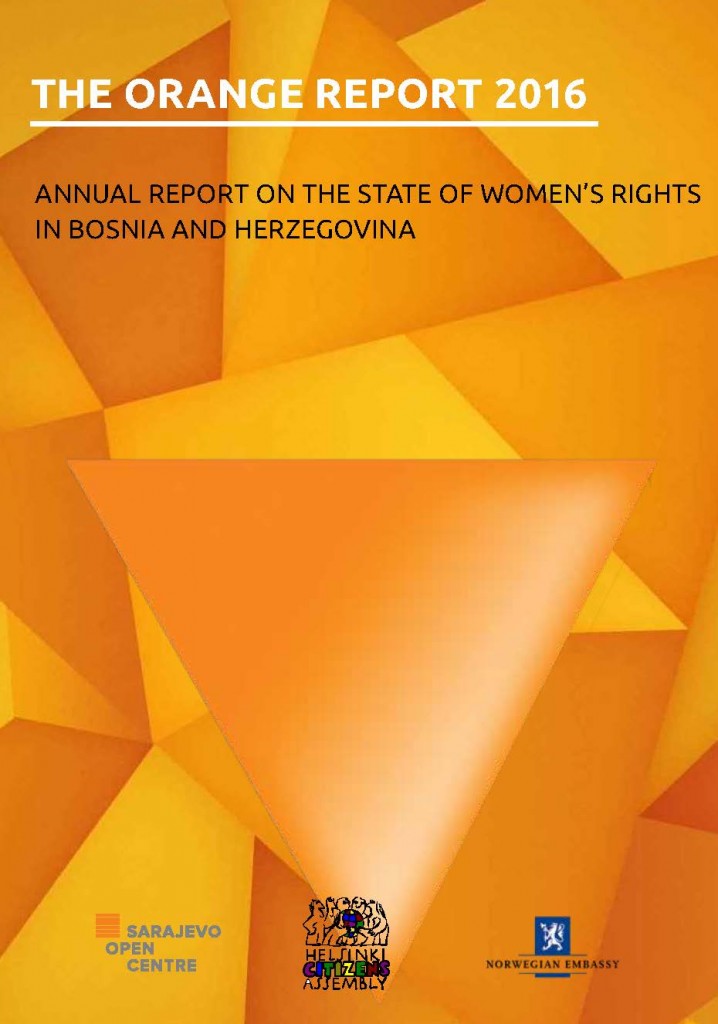 Women and girls are frequently exposed to serious forms of violence, especially physical and verbal violence, violence in the family, psychological violence, sexual violence and rape. These and other forms of violence against women are a serious breach of women’s human rights and are the main obstacles to achieving gender equality.[i] Statistics show that one in three women in the world is a victim of violence and that the perpetrators are frequently their current or former partners. The situation is similar in Bosnia and Herzegovina where violence against women and domestic violence have been considered a private issue for years, the attitude that is still widespread today. 52.8% of women over the age of 15 in Bosnia and Herzegovina have experienced some form of violence.[ii] In 2013 a study on the incidence of violence against women in BiH and its characteristics,[iii] was conducted on a sample of 3,300 households. The study found that one in every four women was a victim of violence and that one in every ten had been a victim of violence in the past year. This study found that women aged 18-24 are the most frequent victims and that women from rural areas are disproportionately affected. It is also important to note that women frequently cannot identify that violence is being perpetrated against them and they do not perceive themselves as victims – only 5.5% of those exposed to violence ask for help and support. The research also found that psychological violence is the most frequent form of violence women are exposed to, as well as a combination of psychological and physical violence.

Legislative regulation for combating violence against women and domestic violence

BiH ratified the Istanbul Convention – the Council of Europe Convention on Preventing and Combating Violence against Women and Domestic Violence – in 2013, as one of the first states to sign and ratify the Convention. The Convention is the first international legally binding document which offers a wide-ranging set of measures for prevention and combating of violence against women and domestic violence, and which stipulates punishment of the perpetrators. In July 2015 a Framework Strategy for the Implementation of the Convention on the Prevention and Combating Violence against Women and Domestic Violence in BiH was adopted for the period 2015-2019.[iv] The Strategy presents an exhaustive framework that defines the implementation of Istanbul Convention in BiH and the steps necessary for harmonization of the legislative and institutional mechanisms with the provisions of the Convention. Unfortunately, the Government of RS had not approved the passage of Framework Strategy. Implementation of the Istanbul Convention will be one of the great challenges of 2016. It is therefore good news that in August 2015 the Gender Equality Agency has signed a Memorandum of Understanding with the Safe Network BIH,[v] a coalition of civil society organizations – including all nine safe houses in BiH – working on tackling gender based violence. In addition to this, the Gender Equality Agency, through the proxy of the Ministry of Human Rights and Refugees, established cooperation with the USAID mission in BiH, in October 2015. As a result of this cooperation the Agency will, as of 2016, supervise a program for implementation of the Istanbul convention worth 750,000 USD.[vi]

The Work and Financing of Safe Houses in BiH

In the commentary to the Istanbul Convention it is stated that specialized safe houses for women are the best way of caring for victims of violence. These houses are best equipped and their functions are far broader than just securing accommodation – they offer psychosocial help and rehabilitation to the victims of violence, which is supposed to enable the victims to carry on with their everyday lives.[vii]

On the territory of BiH there are nine safe houses with a total of 193 spaces for women and children victims of violence.

Table: Overview of accommodated victims in 2015.

There are six safe houses in the territory of the Federation of BiH which are ran by NGOs and serve to accommodate victims of domestic violence. In the Law on Combating Domestic Violence FBiH the financing of safe houses is regulated so that 70% of the expenses are covered by FBiH and the other 30% is covered by cantons. The Law prescribes an obligation to adopt Acts which will regulate the establishment, operation and financing of safe houses, but they have yet to be passed. The assessment made by the safe houses is that 240,000 KM is necessary annually to support the work of one safe house. According to the information for the last seven years between 300 and 350 victims of violence are housed in safe houses of FBiH each year. Until now the Federation of BiH has only provided up to a tenth of the necessary funds.  In 2015 the Federation of BiH did not allocate a single KM for the work of the safe houses. The rest of the funds were received from donations, but this makes the survival of the safe houses uncertain. The survival of the two safe houses in Mostar is uncertain since they have not been able to accommodate victims of violence since 2015.

The situation in Republika Srpska is much better. In this Entity the formation and financing of safe houses is regulated by the following legislative and sub-legislative acts: Law on Combating Domestic Violence of RS, Rulebook on the Standards for the realization of a safe house, Rulebook on the financing of safe houses. There are three safe houses in RS with the capacity of 52 places. Despite the adequate regulation there is not a single house in the entire region of Eastern Bosnia/Eastern Republika Srpska (from Zvornik in the North to Trebinje in the South). The Law prescribes that the funds for temporary care and accommodation of victims are secured from the budget of Republika Srpska (70%) and from the units of local self-government (30%) according to a determined amount. These funds are awarded according to the number of decisions issued for accommodation of the victim in the safe house. The decisions are issued by the Centre for Social Work and the amount necessary to house one victim for one month is 1672 KM.

Challenges in 2016: The fight to save the safe houses in FBiH

Although the Law on Combating Domestic Violence FBiH makes provisions for funding of safe houses in Article 35, FBiH has not yet fulfilled its legal obligation to fund 70% of the safe houses’ expenses. In 2015 the Government of FBiH determined that the provision in Article 35 is unclear. Instead of requesting the interpretation of this provision the Government formed a working group to analyze the Article 35 and draft a proposal of the Law on Changes of the Law on Combating Domestic Violence. The working group specified two possible solutions as a legal basis to establish safe houses in FBiH: a) establishing them in accordance with the Law on Institutions in BiH, or b) establishing them in accordance with the Law on Foundations and Associations in BiH and FBiH.

Although three members of this working group were opposed the Government of FBiH decided to propose the Law on Changes and Amendments of the Law on Combating Domestic Violence of the Federation of BiH on the basis of a decision by the Ministry of Justice and the Ministry of Work and Social Policy, so that safe houses have to be registered as institutions and so that their funding would be approved according to each victim they house in the amount that only covers accommodation and therefore does not reflect the real expenses the safe houses incur.[viii]

This proposal is justified on the basis that oversight of the work of the safe houses is difficult and that it could be normalized if the safe houses were to have a status of an institution. The representatives of the organizations that run the safe houses claim that the state already has oversight over their work. It should be mentioned that in Republika Srpska safe houses work successfully under the banner of associations and foundations, in line with the law and sub-legislative acts.

The Draft Law on Changes and Amendments to the Law on Combating Domestic Violence FBiH was adopted on 2 December 2015, following a dynamic discussion in the House of Representatives PFBiH and it was then forwarded to the public discussion. If this Draft is passed it will lead to an increase in the administrative procedures for the existing safe houses and it will make their functioning more difficult. Eventually it will also lead to the impossibility of funding (because there are no provisions for fixed costs) and therefore to the closing down of the safe houses. By insisting that safe houses be institutions an additional burden is imposed on the NGOs – to have twice as much bureaucratic work, without any promises that the Government will in fact secure funding.

This Draft was opposed by the civil society organizations and the BiH public. The Civil Society Organizations proposed an alternative solution at the end of 2015. The solution envisages that provisions enabling the formation of safe houses according to both the Law on Institutions BiH and the Law on Foundations and Associations BiH and FBiH be added to the Draft Law on Combating Domestic Violence BiH. This solution would enable the existing safe houses to continue their work, but it would also allow for the establishment of new safe houses in accordance with the Law on Institutions. In 2016 the civil society organizations will continue working on this question in order to reach the most acceptable solution for everyone.

You can find the Orange Report 2016 – Annual Report on the State of Women’s Rights in BiH following this link.