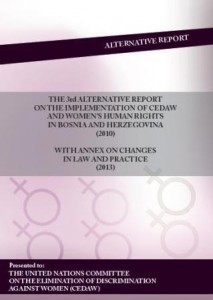 On Monday, during the 55th session of CEDAW Committee in Geneva, non-governmental organisations from Bosnia and Herzegovina, Serbia, Cape Verde and the United Kingdom have presented priorities and recommendations concerning the improvement of the position of women in their countries.

Delegates of the informal network of organisations for human rights in Bosnia and Herzegovina, Edita Miftari (Sarajevo Open Centre), Fedra Idžaković (Rights for all) and Minja Damijanović (United Women Banja Luka), that worked on the making of The Alternative report on the implementation of CEDAW  convention and women’s human rights in Bosnia and Herzegovina,  and the representative of the Association PROI, Jasmina Hasanagić, in their address to the CEDAW committee have focused on the non implementation of the law that addresses the violence against women, weak criminal policy that, as a result, has the impunity of violence against women, and insufficient and inadequate state service of support and help to women who are victims of violence. They have noted that whenever there is support, it is usually offered only to women who are exclusively victims of family violence  and women victims of human trafficking, while women who are victims of other forms of violence are being neglected. They have also pointed out that specialised support from the non-governmental organisations does exist, but the budgeting is insufficient, and, in great deal, depends upon foreign donations and the efforts of non-governmental organisations.  Related to that, women are discouraged  and fear reporting violence. They have pointed out that there are no correct data on violence against women, mostly because of the absence of unique methodology of the data collection as well as the absence of adequate data base. They have stressed that the probability of marginalised women becoming victims of violence increases.

More information on yesterdays address to CEDAW committee is available on this link.

The address of Bosnia and Herzegovina to CEDAW Committee that will take place on July 19th between 10am and 5pm will be live streamed on this link.