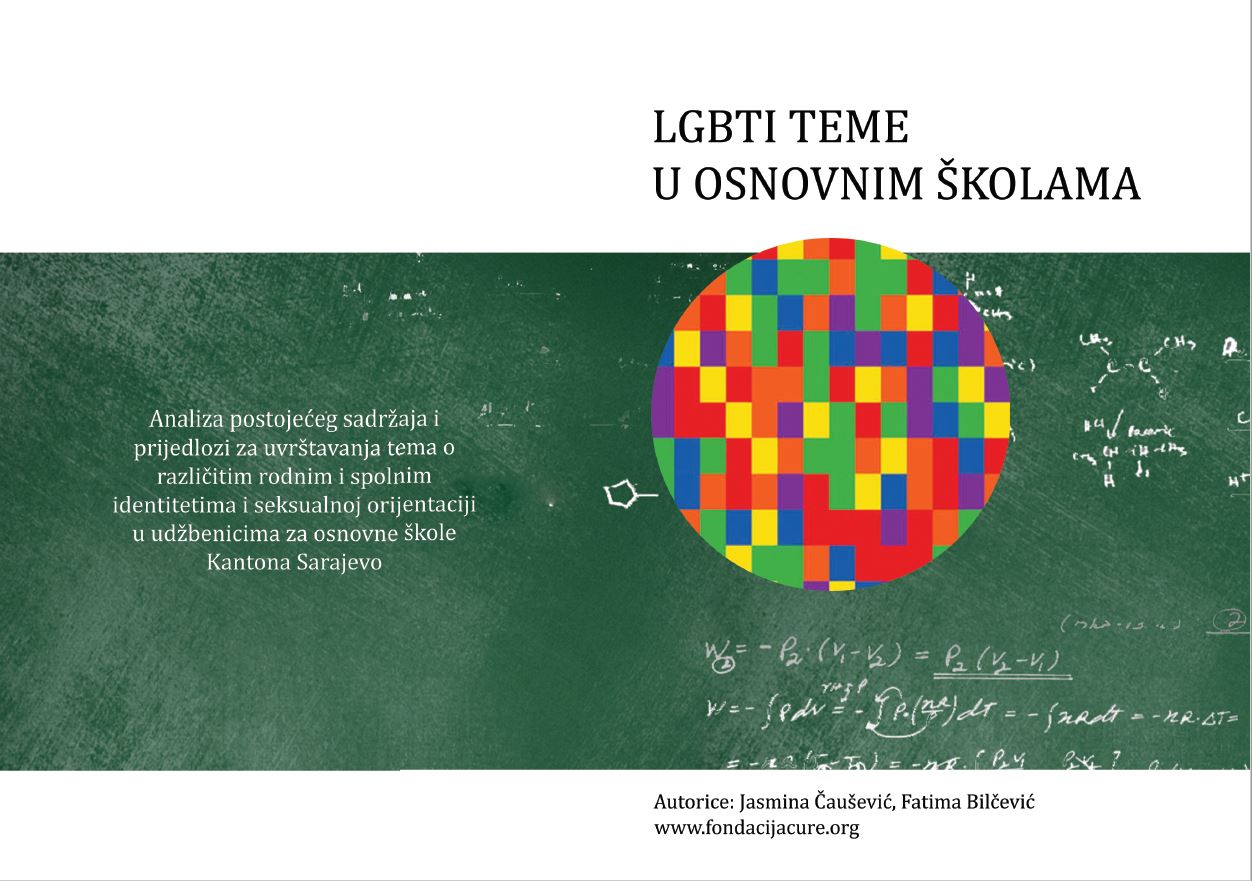 In 2017, CURE Foundation implemented a project titled “Utilizing the EU integration process for the improvement of LGBT rights in the Western Balkans” with the financial support of the Sarajevo Open Center. During the second year of this project, a research entitled “LGBT topics in elementary schools?” was conducted, where elementary school textbooks in the area of Sarajevo Canton were analyzed and a great number of stereotypes and prejudices were detected in the context of LGBTI rights and women’s rights. With the analysis of textbook content in elementary school textbooks approved for use in teaching in Sarajevo Canton in the school year 2016/2017 we wanted to show how and to what extent the textbooks present the wide range of LGBTIQ issues and rights. In this analysis, the focus was on 40 textbooks used in elementary schools in Canton Sarajevo in the school year 2016/2017 for subjects: BCS Language and Literature, My Environment, Society, Biology, Religion and Healthy Lifestyles. In addition to analyzing the current situation, the contribution of the analysis is reflected, in particular, in the proposals for changes and additions to certain content in favor of a more diverse approach to topics related to different gender and gender identities and sexual orientations. During the work on the proposals for changes of the existing contents, which we have identified as problematic, the authors tried not to cross the lines of the plan and program of the foreseen topics within the teaching units for elementary schools in the Federation of Bosnia and Herzegovina. It should be noted that when it comes to the textbook corpus used for this research, although it should in principle include textbooks from the targeted subjects of all nine grades of elementary school, the authors determined that neither in the textbooks for My environment nor for BCS and literature subject and other, which are used from the first to the fourth grade, there is no debate about sexuality, and especially the mention of LGBTI themes. Therefore, the authors placed the focus of this research on textbooks from the fifth to the ninth grade, approved in Canton Sarajevo, in the area of ​​BCS language and literature, Biology, Religion and Healthy Lifestyles. All proposed amendments were explained in detail in the research entitled “LGBT topics in elementary schools?” by authors Jasmina Čaušević and Fatima Bilčević. Research will soon be available on the website of CURE Foundation: www.fondacijacure.org.

It is important to note also that the elimination of discrimination requires the exchange of textbooks in BiH in order to eliminate stereotypes and stop creating prejudices, and the fight against discrimination is, by the way, one of the main focuses on which the European Union constantly alerts BiH through its annual reports and something that is one of the main conditions of full EU membership.