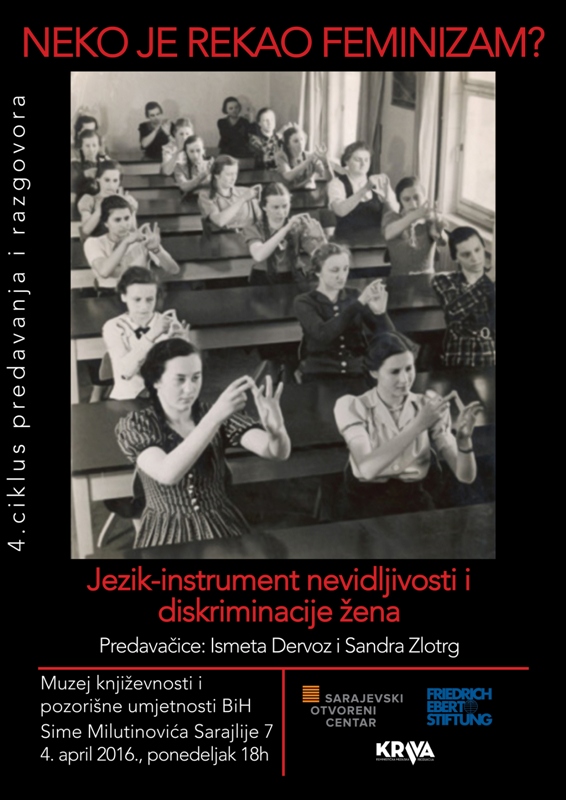 Sarajevo Open Centre and the Friedrich Ebert Foundation in Bosnia and Herzegovina will organize 6 lectures in 2016, which will cover the following topics: Antifascist Women’s Front Archive BiH, ideology and language, challenges facing feminism today, feminist critique of political economy, the relationship between religion and feminism and reproductive rights.

Topic: Language – an instrument of marginalization and discrimination

We want to invite you to the 4th series of feminist lectures and talks Somebody said feminism?. The second lecture will be given by Ismeta Dervoz, an MP in the Parliamentary Assembly during the 2010-2014 mandate, and Sandra Zlotrg, a professor of Bosnian, Croatian and Serbian Language from the Association ‘Lingvisti,’ who will speak about Language as an instrument of marginalization and discrimination of women. Ismeta Dervoz will discuss the initiative she proposed to the Gender Equality Committee to introduce gender-sensitive language into the Parliamentary Assembly BiH. Why would women who sit in Assembly be AssemblyMen and not AssemblyWomen? Was this language reform met with resistance? What are the chances that the same model will be implemented by other Parliaments, Assemblies and Councils? Sandra Zlotrg will speak about why gendered nouns are important; how women are made invisible by the generic male terminology; how language can be used as a tool for achieving gender and other forms of equality in society.

Ismeta Dervoz has worked as a screenwriter, TV anouncer and a commentator for RTV Sarajevo since the 1980 following a succesful music career. She initiated the BiH participation in the Eurovision Song Contest and has been the delegation leader for years. She held executive positions at the music program of TV BiH, cultural and entertainment program of FTV, she was a producer of various festivals and concerts. Unhappy with the state of the media she resigned after 36 years of work and started her political cereer shortly before the 2010 General Election, as a member of the SBB Party. She has been directly elected to the Parliamentary Assembly of BiH from the second position on the list (so far this is the only instance this has happened in the electoral processes for this level of government). She was a Deputy of the Club of SBB MPs in the Parliamentary Assembly for the 2010-2014 mandate. She was appointed the first deputy of the Committee for Gender Equality of the House of Representatives of the Parliament BiH and the First Deputy of the Committee for Equality and Non-Discrimination of the Parliamentary Assembly of the Council of Europe. During her mandate in the Parliamentary Assembly she initiated the harmonization of the Election Law BiH with the Gender Equality Law (40% quota which was passed in both houses in 2013) and the introduction of gender-sensitive language in the Assembly (passed in both houses in 2013), the Changes and Amendments to the Law on the Revision of Institutions (passed in the House of Representatives in 2012), The Framework Law on Technologically Assisted Reproduction (currently in procedure in the House of Representatives). She also initiated the signing and ratification of the Istanbul Convention of the Council of Europe (CAHVIO) and she worked on its promotion in the region. With 40 years of work experience she retired in 2015. She actively cooperates with the Civil Society, NGOs and the Women’s Network in BiH and in the Region.

Sandra Zlotrg graduated from the Faculty of Philosophy in Sarajevo, from two departments: Bosnian, Croatian and Serbian Language and Literature and Comparative Literature. She works as a proofreader and a teacher of BCS as a second language in the Association ‘Lingvisti’ where she is also the Directress. She has been an advocate for gender-sensitive language since 2011. She has co-athored the guide: The ways to overcome discrimination in language in education, media and legal documents, with Jasmina Čaušević. She participated in the intorduction of gender-sensitive language in the Parliamentary Assembly BiH. She is currently awaiting a date for the award of her master thesis entitled: Gender and the Use of Jargon.