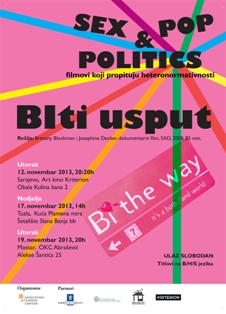 Sarajevo Open Centre and The Royal Norwegian Embassy, as a part of the Sex, Pop and Politics film program – films that question heteronormativity – present the American documentary about bisexuality “Bi The Way” (Directed by Brittany Blockman and Josephine Decker, documentary film, USA, 2008, 85 min).

The film was made during a trip and follows discussions between the directors of the film and five young Americans about their bisexuality. Throughout the film we get to know the story of a former cheerleader who talks about her sexual openness and her respect towards her conservative Catholic family. We also meet a young hip-hop dancer who is successful in relationships with girls, but who also builds a relationship with a man, which elicits a strong reaction from the community. The question of bisexual orientation is presented to those who may not understand it through the actors and protagonists of the film presenting their personal stories.