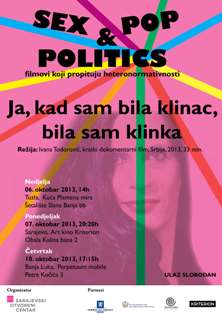 We invite you to the screening of Ivana Todorović’s documentary film Ja, kad sam bila klinac, bila sam klinka (When I Was a Boy, I Was a Girl) and a Q&A session afterwards with our guest – the main protagonist of the movie – Goca.

Goca is a transgender person who lives in Belgrade, the capital of a country where gay pride parade is prohibited. She is raising a daughter who is, actually, her niece. She is risking her life doing the job she’s doing. Although her 18 year old boyfriend doesn’t respect her, Goca still loves him and manages to keep her optimistic disposition, without prejudice. She decides to spend her 39th birthday by going out on the stage to tell her life story – Ja, kad sam bila klinac, bila sam klinka (When I Was a Boy, I was a Girl). The text for this cabaret piece was written by Goca herself, with the help of dramaturg Olga Dimitrijević. Few months after the shooting of the movie, Goca started working as an activist for the transgender rights in Serbia and has founded Association Hestija.

Q&A session will be moderated by Jasmina Čaušević.