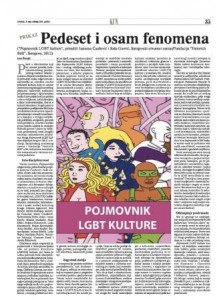 To write about identities which have been removed and systematically made invisible inside the hetero-normative, patriarchal order means to except a great responsibility and to boldly dare to represent a culture, which has been struggling (and still struggles) to break through to the

sphere of visibility within the dominating phallo(go)centric discourse by different means of (re)presentation and action. It seems even more complex and subversive to write about the culture and identity of Others from the perspective of post-war BiH, characterized by the constant re-patriarchalisation and re-traditionalisation. In this chaos of unsolved political, social, legal and other problems, fundamental human rights (freedom of speech and assembly of Others, in the first place) are considered issues of secondary value. Thus, Pojmovnik LGBT kulture published at the end of 2012 by Sarajevo Open Centre and Heinrich Böll Foundation seems as an exceptional cultural enterprise.