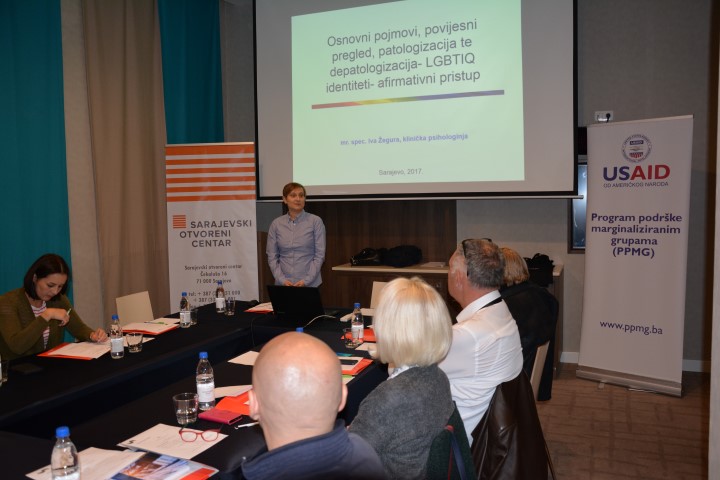 On the 6th October in 2017 medical stuff  of the psychiatrist hospital Jagomir had an opportunity to hear basic information about rights and needs of LGBTI persons. They got these information at the info session which was organized by Sarajevo Open Centre in order to achieve better relations between LGBTI persons and medical stuff through  demarginalization of this minority group.

Info session was led by Iva Žegura, who is a clinic psychologist and who deals with these questions for many years. She talked about rights and needs of LGBTI people when it comes to treatment of LGBTI people by medical stuff.

Iva žegura is a member of the Croatian Psychologist Council, Croatian Psychologists’ Association, European Federation of Psychologists’ Associations, and she is a professional associate of organizations Lori, Kontra and Iskorak. She has been working in the field of transgender identities and transexuality since 2005, and attended many educations including educations in work with kids who  experienced gender dysphoria and adolescents at Vrijeq Universiteit Amsterdam Medisch Centrum Amsterdam- Gender Clinic.

At the opening of the session participants were introduced with terminology and history of LGBTI activism and treatment of LGBTI people by medical stuff. The current situation of medical  treatment of LGBTI persons   in Bosnia and Herzegovina was presented and compared to neighbouring countries and developing European countries.

Participants agreed on conclusion that discrimination and marginalization of any minority group is inadmissible, especially when it comes to medical institutions.

A director of psychiatrist hospital Jagomir, Muhamed Ahmić, emphasized that LGBTI population, as any other population, has its own specificities and characteristics, and it is important for psychiatrists to get introduced with their problems that are products of reactions to their sexual orientation and gender identity by the society. He also emphasized that psychiatrists have to cure their patients on the basis of their diseases, and not on the basis of sexual orientation and gender identity.